Security men have reportedly killed as many as three persons after a fire outbreak ravaged an Oyo market. 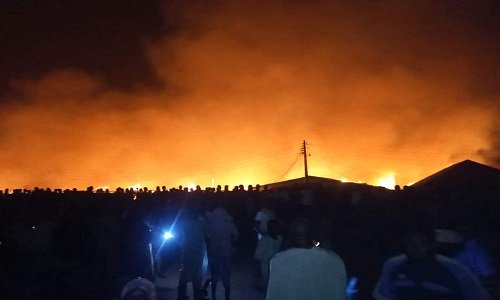 According to a report by The Nation, pandemonium broke out in Oyo town, Oyo State, on Sunday as an early morning fire razed the larger part of the ancient Akesan market.

Men of the nearby fire service were unable to contain the fire.

The situation became tense when youths vented their anger on the fire service officials, who attributed their incapacities to non-functional equipment at their disposal.

The youth had stormed the fire station burning tyres. The situation attracted the attention of the security personnel, who were alleged to have used live bullets on the protesters, allegedly killing three.

To battle the raging fire, a reinforcement of fire fighters was mobilised from Ibadan and Ogbomosho.

Although our source could not reveal the identity of the security operative who allegedly fired the bullets that felled three of the protesters, operatives of the state-owned anti-crime outfit codenamed “Operations Burst” were fingered as the culprits.

Contacted, command spokesman Mr. Olugbenga Fadeyi denied that the bullets of the police felled the protesters.

He said he would investigate to arrest the culprits.

Fadeyi said more men had been drafted to the scene to restore peace and help put out the fire.

An Oyo town based youth group, the Oyo Global Forum, said a good part of the market would have been saved if the nearby fire station had functional equipment.

Condemning the Oyo State Government for not providing the necessary equipment for the fire fighters to work with, the group kicked against what it described as disproportionate use of force in response to angry residents by the security operatives, which led to the death of three innocent and harmless youths.

A statement signed by the Secretary of the group, Mr. Taiwo Hassan Adebayo, said that in due course it would demand from the government compensation and rebuilding of the market.

At press time fire fighters were still battling the inferno.

The fire was said to have started around 1am. No one knows its cause.

The Minister of Youth and Sports Development, Mr. Sunday Dare, has expressed sadness about the devastating fire that gutted Akesan market on Sunday.

In a tweet about the incident, he said: “The news of the inferno that destroyed the popular Akesan ancient market in Oyo just got to me. I am deeply saddened by this disaster so early in the year and extend my condolences to all those affected. I will visit shortly and work with the state government to bring relief.”

The lawmaker representing Oyo Central Senatorial District, Teslim Folarin, sympathised with the people of Oyo town, especially traders who were affected by the incident.

Folarin, who said he arrived London on Sunday to hear the news, commiserated with the victims.