Some really angry passengers have tried to break into a plane cockpit after being trapped on a delayed flight for hours. 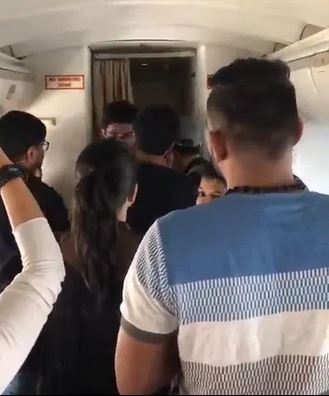 A passenger tried to force open the emergency exit of a plane while others tried to break into the cockpit after their flight was delayed.

Travellers were stuck in the cabin for four hours due to a technical fault.

Air India flight AI865 was due to take off from Delhi Airport at 10:10am last Thursday, with passengers boarding by 9:15am. 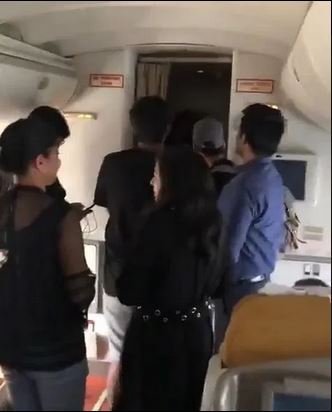 Passengers told the pilots to get out of the cockpit

However, the one and a half hour flight to Mumbai faced technical problems, leading to the lengthy delay.

Passengers were only allowed off the flight at 2:20pm, before being put on an alternate flight at 6pm - over seven hours later.

Furious people on board are pictured standing in the aisle of the plane while banging on the cockpit door. 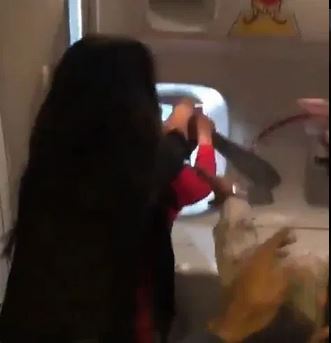 A woman also tried to open the emergency exit

One passenger shouts: "If you don't open the door, I will break the door."

Another woman was caught trying to open the emergency exit.

Cabin crew quickly pulled her away, while other travellers told her to stop.

The flight attendant then checked the window before opening the door herself. 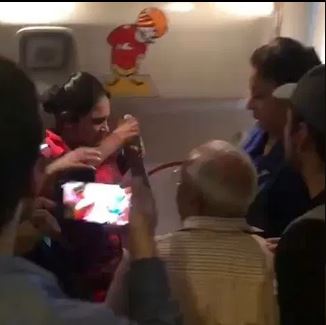 Crew were forced to pull her away from the door

No passengers have been charged yet, although the airline is investigating the incident.

Potential charges could result in passengers being grounded for two years under new rules in India.

Anyone found to have enacted "life-threatening behaviour [or] damage to an aircraft," could face criminal charges. 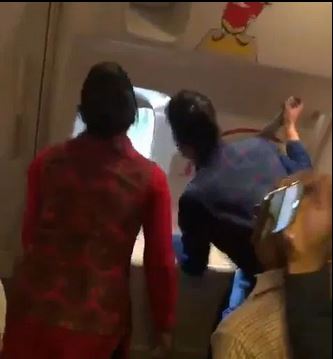 A spokesperson told Times of India: "The flight was considerably delayed due to technical reasons.

"Air India management has asked the crew for details for a detailed report on the reported misbehaviour by some passengers.

"Further action will be considered after the report."