This Is A Defining Year For Nigerian Heavyweight Boxer, Efe Ajagba


Shields, who has coached the likes of Mike Tyson and Evander Holyfield in the past, has been training Ajagba since 2017. 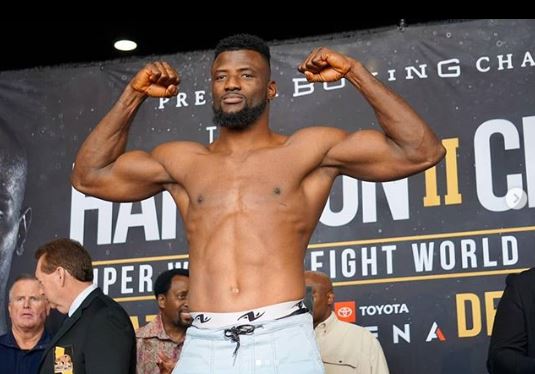 Legendary boxing trainer Ronnie Shields believes that 2020 will be a defining year for Efe “The One and Only” Ajagba in the heavyweight division.

The Texas-based heavyweight capped a brilliant 2019 by beating Georgian Iago Kiladze in the 5th round at the Toyota Arena, California last month.

The 25 year-old had also beaten Ali Eren Demirezen on points, ex WBO European champion Michael Wallisch and Amir Mansour earlier in the year.
Shields, who has coached the likes of Mike Tyson and Evander Holyfield in the past, has been training Ajagba since 2017.

“People will appreciate everything that he does. This kid works hard. I have to pull him off stuff because he is trying to do too much. Most trainers would dream of having the same scenario with some of their fighters.

“He is a student of the game. He studies his opponents, so he knows everything that I am telling him.”

The 61 year-old coach also believes that Ajagba is improving as a boxer and wants to conquer the heavyweight division in the future. He also added that his team would not rush the former Olympian’s development. “Ajagba has been improving everyday,” Shields said.

“He is a kid who wants to learn and wants to be a champion. He knows he is a young kid and has to take baby steps so we don’t want to rush him into anything but we feel like now we have to start stepping him up a little bit more.”

Undefeated Ajagba has been impressive since joining the professional ranks in 2017, amassing a total 11 knockouts in 12 fights including the fastest KO in boxing history when Curtis Harper walked out of their fight after touching gloves and the bell sounded to start the opening round in 2018.