The cleric warned that the Federal Government was fanning the embers of Islamization in Nigeria if more Christians don’t get key appointments. 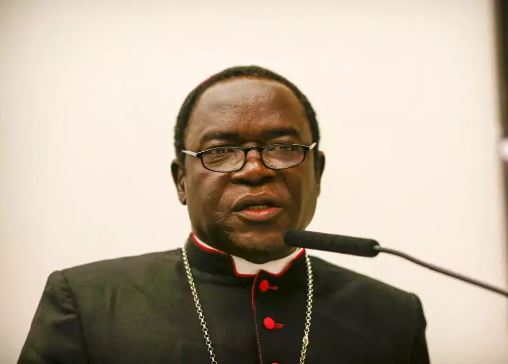 The Catholic Bishop of Sokoto Diocese, Most Rev. Matthew Hassan Kukah, has disclosed that the only “thing” preventing a civil war in Nigeria was the “peaceful tenets” of Christianity in Nigeria.

He made the remark while claiming that the Federal government was using different methods to achieve the goal of Islamic dominance in Nigeria.

The cleric warned that the Federal Government was fanning the embers of Islamization in Nigeria if more Christians don’t get key appointments, Vanguard quoted him as saying.

“They are using the levers of power to secure the supremacy of Islam which then gives more weight to the idea that it can be achieved by violence. They have created the conditions to make it possible for Boko Haram to behave the way they are behaving.

“On Boxing Day 2019, ISWAP released a video beheading 10 Christians and shooting one Muslim, saying they were avenging the death of Abu Bakr al-Baghadi, Daesh, ISIS leader, and other senior Daesh members killed during a US raid in October.

“The beheading of the 10 Christians followed a Christmas Eve attack by Boko Haram, in which seven were killed in cold blood, adding that the United Nations estimated that over 2.2 million people have been displaced by Boko Haram’s actions between 2013 and 2015.

“More than 11,000 innocent people were killed by the rampaging Islamist group. The Nigerian government, by packing key government positions with hardline Muslims, gives tacit approval to such groups.

“If the people in power don’t do enough to integrate Christians, then they give oxygen to Islamism. If they have countries where everybody in power is Muslim, then you give vent to the idea that Islam should be supreme.

“The western nations are not doing enough. They have shown that the resources of Africa are more important than the ordinary people.

“Clearly, the Western nations could have reduced the influence of Boko Haram by 80 or 90 percent. They have deliberately not done enough. The only thing preventing Nigeria from being engulfed in civil war is the peaceful tenets of Christianity”.