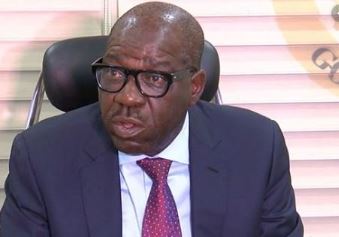 Factions of the All Progressives Congress (APC) in Edo State have disagreed over the purported endorsement of Governor Godwin Obaseki for a second term.

The party Chairman in Ward 10, Alhaji Abubakar Akokia, described the news as untrue. He also denied the purported suspension of the National Chairman, Comrade Adams Oshiomhole.

He said: “…it has again exposed how desperate Obaseki is for a second term when he has not merited it. Obaseki is a colossal failure and does not deserve our support. APC leaders in ward 10 stand with the National Chairman of our great party who has done creditably well in office.

“We have not seen a situation where endorsement is done at the Edo State government House before. You don’t gather your aides to endorse any candidate. Beside, INEC is yet to come up with its time table for the campaign, and it is irresponsible on the part of the governor to force his staff to endorse him for a second term.

“Endorsement is done at the ward levels and not at the Government House. We know that Anslem Ojezua has been constitutionally impeached as state chairman and Col. David Imuse elected as the new chairman. We urge the public to disregard the fake news from the Government House. We reiterate the vote of confidence passed in Comrade Oshiomhole and Col. Imuse. We are proud of what they are doing both at the National and state levels.

Factional Chairman Oshawo Stephen, who led others to declare their support for the governor’s second term bid yesterday, said: “We came to visit our Governor for the New Year, to pray for him so that God will continue to elevate him for his good works in Edo State.”

He described the governor’s performance as excellent, urging him to continue his good works in developing the state.

State Chairman Anselm Ojezua described the visit as heart warming. He said: “You know that under the current circumstances, you will expect that people at the ward level would have been pressurised by now. You can understand their situation. But as you can see, these men and women are determined that justice must prevail Edo State APC, and to that extent, I am grateful to them.”