Eight Killed As Vehicle Crashes Into Market In Cross River


An eyewitness, Patrick Ofem, said that the vehicle descended from a hilly junction during the afternoon period. 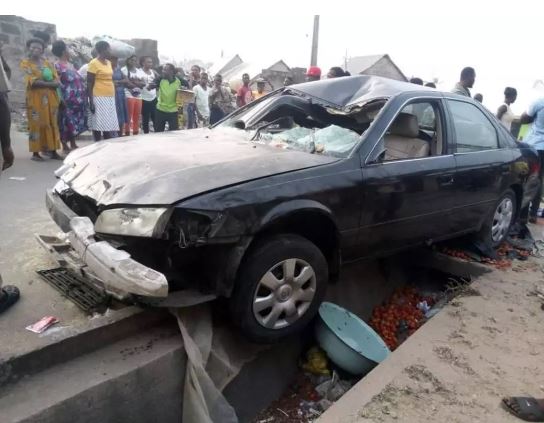 The scene of the car accident

About eight persons were allegedly killed in a fatal car crash in a market in Ugep, Yakurr Local Government Area of Cross River State.

The accident occurred on Tuesday, at the weekly market day in the area when a Toyota Camry ran through shops, leaving three persons dead on the spot while five others allegedly died in the hospital.

An eyewitness, Patrick Ofem, said that the vehicle (Registration number not seen) descended from a hilly junction during the afternoon period of the day after a break failure and caused the worst havoc the community had ever faced – with properties worth millions of naira destroyed.

“A Toyota vehicle descended from the nearest junction (Ediba junction) into the market, which entered into people’s shops and destroyed properties and about 11 victims were recorded. Three of them died instantly, while the others were rushed to the hospital.

“While at the hospital, 5 people later died, raising the death toll to 8. The Ugep people cried like never before, as they lamented to God for letting such calamity befall them this new year,” Ofem said.

Another eyewitness who gave his name as Obasesam Ikpi, said the incident was tragic as the entire residents of Yakurr Local Government Area are mourning the persons that died from the fatal accident.

According to Ikpi, “A car, which was coming from Ediba junction in Ugep, along Ikom/Calabar Highway lost control, entered into people shops and condemned properties in Ugep Tuesday market.

“One lady and two guys died at the spot while the other five died in the hospital after eight of them were rushed to the hospital.

“The driver was said to be in coma as at the moment,” the witness said.

When contacted via phone on Wednesday, the Paramount Ruler of Yakurr local government area of Cross River State, His Royal Majesty (HRM), Obol Ofem Ubana Eteng, said that only two persons died on the spot and several others sustained various level of injuries.

“Two persons were reported dead and over seven sustained various levels of injuries. I am going to the hospital to check on those that sustained injuries as well as number of those that died again,” he stated.