27 Nigerian Women Trafficked Into Lebanon As Slaves Investigated By NSCDC 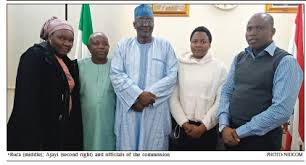 Kwara State Command of the Nigeria Security and Civil Defence Corps (NSCDC) has said that it is investigating a list of 27 Nigerian women who travelled to Lebanon in search of employment but ended up trafficked as slaves.

The Commandant of the NSCDC, Commander Bello Ale, disclosed this in Ilorin while handing over Mrs Gloria Taye Bright, who was rescued from Lebanon and repatriated to Nigeria in the early hours of Tuesday, to the President of Eruku Progressive Union, Mr Shola Daniels.

Ale, who said that the repatriation of Gloria was one of the successes recorded by the security agency in its investigation of the alleged slavery of Nigerian women in Lebanon, stated that repatriation was achieved through the Nigerians in the Diaspora Commission (NIDCOM) and an NGO, Phemnick Life Support.

The Commandant said that the list of the 27 women in Lebanon were revealed in a document retrieved from the three suspects arrested in connection with the alleged inhuman treatment of some Nigerian women who travelled to Lebanon, including Ms Omolola Ajayi and Mrs Gloria Taye Bright, whose videos of being subjected to human slavery went viral in the country.

Ale said that the NSCDC was happy on the success made, stating that “without the discovery and repatriation of Gloria, we would not have discovered where Omolola Ajayi was, adding that the arrest of the three suspects and the recovery of the documents containing the list of the 27 women who travelled to Lebanon through their agency exposed a lot about the deal.”

He said that the three suspects arrested included a Lebanese, Wasit Muhammad, 63, Adetunji Sanusi, 33, and a lawyer, Tunde Awwal, 27, while the NSCDC was still searching for another member of the gang identified as Joseph who is presently at large.

Gloria Taye Bright, 33, who said that she travelled to Lebanon in October 2019, stated that she was recruited in Ilorin, Kwara State to work as an English teacher in Lebanon on a monthly salary of $1,000.

Taye who hails from Eruku in Ekiti Local Government Area of Kwara State said that her job was changed to house help when she got to Lebanon, saying that she perform all sorts of menial jobs for her master.

A holder of National Diploma (ND) in Accounting said: “There is no job in Lebanon and there is no dollar in that country but they tricked us to the place and made us believe that there is work there.”

She advised Nigerian women to beware of the travelling agents who lied to them that there are jobs in foreign countries.

National President of Eruku Progressive Union, Mr Shola Daniels, expressed gratitude to the NSCDC and other security agencies that worked for the location of Taye and the NGO as well as the Federal government that made the repatriation possible.