Was Osinbajo Involved In Ihedioha's Sacking As Imo Governor? This Is What His Aide Has To Say


Yemi Osinbajo's aide has reacted to claims that the Vice President was involved in the sacking of Ihedioha. 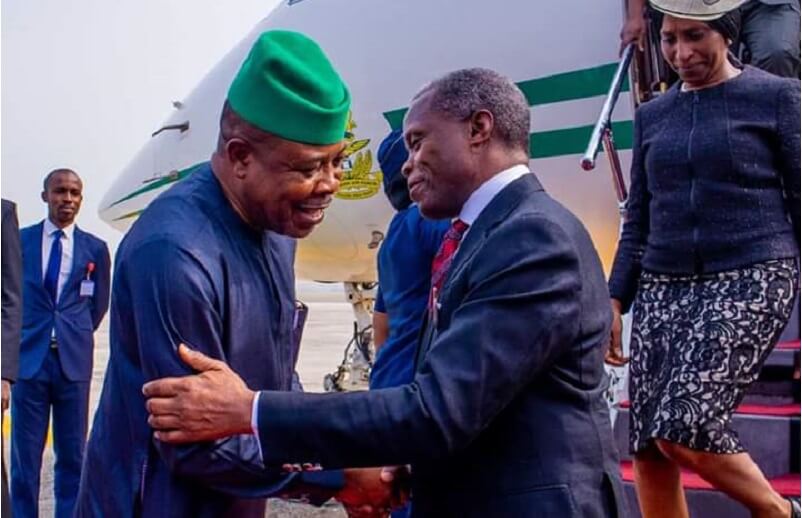 Vice President, Prof. Yemi Osinbajo, says he did not discuss any matter relating to the Imo State governorship appeal with Emeka Ihedioha before the Supreme Court removed him (Ihedioha) as the governor of the state.

Osinbajo’s media aide, Laolu Akande, said this via his Twitter handle on Wednesday.

Recall that, on Tuesday, a seven-man panel of the Supreme Court led by the Chief Justice of Nigeria, Tanko Muhammad, unanimously declared Hope Uzodinma of the All Progressives Congress as the winner of the March 9, 2019, governorship election in Imo State.

Justice Kudirat Kekere-Ekun, who read the lead judgment, ordered that the certificate of return issued to Ihedioha be immediately withdrawn.

She directed that a fresh certificate of return should be issued to Uzodinma.

Justice Kekere-Ekun dismissed the All Progressives Grand Alliance’s Ifeanyi Ararume’s appeal for being academic following the court’s declaration of Uzodinma as the winner of the election.

In upholding Uzodinma’s appeal on Tuesday, the Supreme Court agreed with him that the votes polled in 388 out of the 3,523 polling units were excluded in the final results declared by the Independent National Electoral Commission in the state, on March 11, 2019.

Laolu debunked reports that the VP was involved in any discussion on the court case, noting that Osinbajo understood the implication of doing so.

Laolu tweeted, “I have seen reports suggesting that VP Osinbajo had a discussion with former Gov. Ihedioha about the Imo governorship case in the Supreme Court when he visited Imo last week. This is false and mischievous. The VP went to Imo for a private event and no such discussions took place.

“Besides, it is completely out of character for the VP to discuss on-going court cases with interested parties, with insinuations of illegal and unethical conspiracies. Please ignore such fake reports wherever you may find it. Outright fabrication!”