Governor Wike said that the nation remembers the members of the Armed Forces for their contributions to the unity of the country. 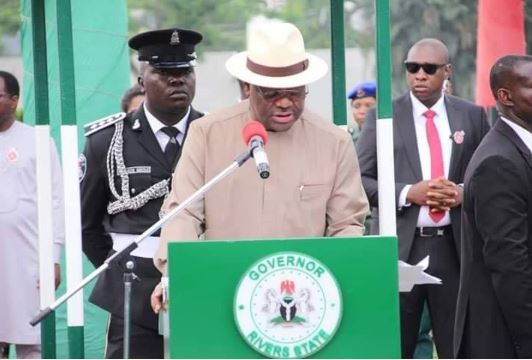 Rivers State Governor, Nyesom Ezenwo Wike has declared that Nigerians must unite and motivate the Nigerian Armed Forces to defeat the insurgents in the North-East.

The Rivers State Governor also announced that the State Government has committed the sum of N100million for the scholarship programme dedicated to the children of the fallen heroes.

He spoke on Wednesday during the Wreath Laying Ceremony in Commemoration of 2020 Armed Forces Remembrance Day Celebration, at the Isaac Boro Park, Port Harcourt.

He said: "The war on terror in the North-East has raged for too long, claiming too many military and civilian victims.

We must come together as a nation to do whatever that is necessary to support and motivate our soldiers to win this terrible war as quickly as possible and save the nation and our brothers, sisters and the children from the North-East from the continuing violence, abductions, and devastation by Boko haram and their affiliates.

"Apart from supporting the establishment of a trust fund, I have directed the Secretary to the State Government to work out areas of support to the State Chapter of the Nigerian Legion and the families of soldiers of River State origin who pays the ultimate price in the active service of our country. In addition, the State Government will provide scholarship for their children up to university level.

"N100million has been committed to the scholarship of the children of the fallen heroes by the Rivers State Government. We will also construct a Secretariat for the Legion, but not at Isaac Boro Park. We will develop the park into a Tourist Centre."

Governor Wike said that the nation remembers the members of the Armed Forces for their contributions to the unity of the country.