A video has surfaced online showing Rochas Okorocha and Imo governor-elect putting their differences aside and shaking hands. 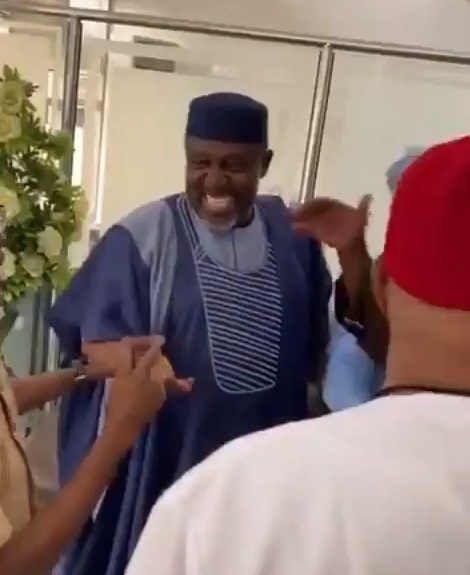 The new Governor of Imo State, Hope Uzodinma and former Governor of the state Rochas Okorocha reportedly "reconciled" hours before he was sworn-in.

The two All Progressives Congress (APC) politicians took opposing camps during the 2019 governorship election after Okorocha threw his weight behind his son-in-law, Uche Nwosu as his successor.

APC Chairman, Adams Oshiomhole who supported Hope Uzodinma in the governorship election, was spotted in the viral video trying to make both men shake amid laughters.

As they shook, Uzodinma was heard saying in pidgin “I don catch you na". Oshiomhole on the other hand sang: “We are reconciling; we are reuniting; as victory comes our way, we put the past behind.”

However recall that the new Govenor of Imo State who was sworn-in last night ordered the probe of the administration of his predecessors; Ikedi Ohakim, Rochas Okorocha and Emeka Ihedioha. Uzodinma directed the Accountant General of the state to send him a comprehensive financial status of the state from May 29, 2010, till date.

Governor Hope Uzodinma and former Governor Rochas Okorocha ‘reconcile’..........this was before he was sworn-in