A 10-year-old boy suffers from a skin disorder which makes him shed skin every four to six weeks. 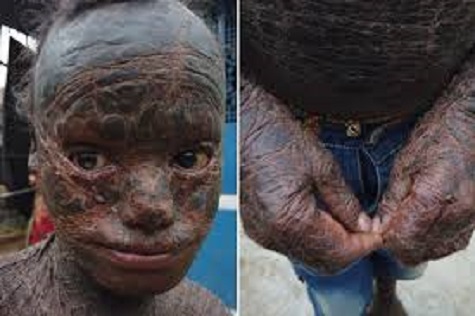 This is very heartbreaking! A ten-year-old boy in India has been dubbed a 'human snake' - because a rare condition causes him to shed his skin every month.

The condition causes the skin to grow too fast, dry out, and shed, much like a reptile's.

Jagannath's case is so severe that his skin sheds every four to six weeks.

He is forced to bathe hourly and smear himself with moisturiser every three hours to try to relieve the symptoms. 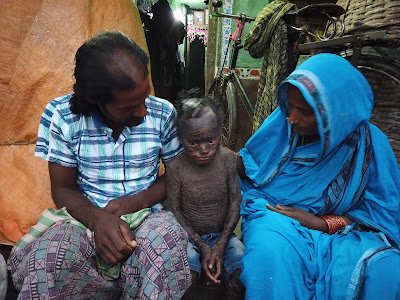 Shocking photos of the young boy, from the Ganjam district of eastern India, show his skin completely dried out and flaky, stretched over his body like scales.

His skin has become so tight that he is often left unable to walk properly, and needs a stick to help him stretch out his limbs.

Sadly, there is no cure for Jagannath's condition - and his father, Prabhakar Pradhan, who works as a labourer in a paddy field, can not afford the cost of his son's treatment.

He said: "My son has suffered this disease since childhood, and there is no cure for it.

"I do not have enough money to take him for a treatment and my heart breaks seeing him suffer with this cursed disease every day."

A dermatologist in the Indian district, who did not wish to be identified, said: "This disease is not treatable, although some doctors say there is a cure."