A large crowd gathered and hailed Father Ejike Mbaka as he attended the swearing-in of Hope Uzodinma as governor of Imo state. 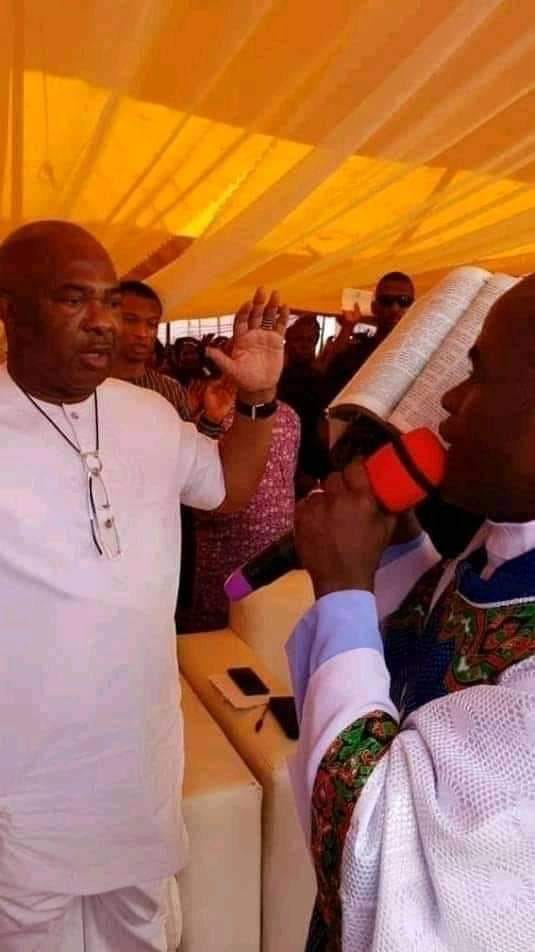 Father Ejike Mbaka prophesying that Hope Uzodinma will become governor in 2020
Man of God of the moment, Reverend Father Ejike Mbaka arrived Owerri, the capital of Imo state like a celebrity with residents of the city gathering around his car as he arrived for Senator Hope Uzodinma’s swearing-in ceremony on Wednesday.
The minister of God who prophesied that Hope Uzodinma, the governorship candidate of the All Progressives Congress (APC), will take over from Emeka Ihedioha as Imo Governor in 2020, and watched it come to fruition was one of the guests at the event held at the Imo State Government House.
He was hailed by a large crowd over the prophecy that came to pass, acording to information revealed by DailyPost.
His prophecy came to pass on Tuesday, as the Supreme Court sacked Ihedioha and declared Uzodinma as the Governor of Imo State.
Other guests included the National Chairman of the APC, Adams Oshiomhole, former Governor of the State, Senator Rochas Okorocha and governorship candidate of APGA in the 2019 governorship election, Ifeanyi Ararume.
Several APC chieftains, including APC National Vice Chairman, Emma Eneukwu, APC National Organising Secretary, Emma Ibediro, the Speaker of the Imo House of Assembly Chiji, as well as Ahmed Gulak and Andy Uba, were also in attendance.
Uzodinma and his deputy, Professor Placid Njoku, were sworn in by the Chief Justice of the state, Justice Pascal Nnadi.
Top Stories