Due to construction going on along the Lagos-Ibadan Expressway, there has been serious traffic gridlock which has caused inconvenience to many Nigerians. 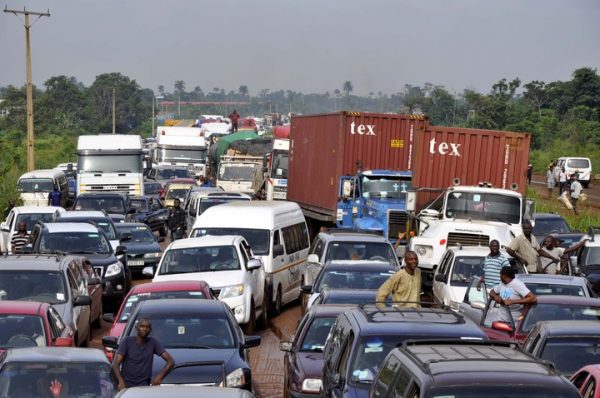 Hundreds of motorists and commuters were left stranded for several hours on the Lagos-Ibadan Expressway on Wednesday.

Those affected the most  were motorists and commuters travelling from Ibafo to Berger bus stop end of the road following the closure of a section of the road for construction work to resume.

It took over four hours on the average to get to Berger bus stop in Lagos from Magboro in Ogun State, a journey that ordinarily would not take up to 10 minutes, with many vehicles breaking down in the gridlock and compounding the situation.

The Lagos inbound section of the road, which was blocked for reconstruction for three months last year, was reopened just before the Christmas and New Year festive season, but the other section was shut to traffic on Monday and the only available section was divided into two for Lagos inbound and outbound traffic.

PUNCH Metro reported that the four lanes at the Kara end of the road had been reduced to two, creating a bottleneck for vehicles trying to enter Lagos.

The attendant gridlock forced many motorists to resort to using the earth road leading to the Kara area by either side of the bridge.

She said, “We know that the government and the contractor, Julius Berger, are trying to make the Lagos-Ibadan Expressway better for use, but the suffering of the people, who live in communities around Mowe, Ibafo, Arepo and environs, and work on the Lagos Island is too much.

“I left the house around 5am and saw the police and area boys collecting N100 from each vehicle before we were allowed to pass through the alternative road, which is very bad, but because we all wanted to get to our offices, we had no choice but to pass through it.

“We need the Federal Government and Julius Berger to make the alternative road passable pending the time the normal route will be completed.”

When contacted, the Ogun State Police Public Relations Officer, Abimbola Oyeyemi, stated that policemen were only deployed in the expressway to control traffic and not in the earth road, adding that motorists and commuters should come forward with evidence of extortion to allow for thorough investigation.

However, later in the day, officials of the construction company moved a bulldozer to the earth road and dug a trench to prevent vehicular movement through  it.

This compounded the already chaotic traumatic experience of motorists plying the road as many vehicles, which were using the earth road as an alternative route, had to turn back to join the Lagos inbound lane from Warewa.

A commuter, Ajayi Jimoh, who condemned the blockage of the alternative route to the Kara area of the road, lamented that he spent six hours on the road for a journey that should not have lasted up to 15 minutes.

He said, “I left my home in Mowe around 5.30am for the office on Victoria Island, Lagos. My movement has not been progressive because I just reached Warewa. Why are we being made to suffer like this because of road construction?

“Many people have died as a result of this traffic. Last year, a motorcyclist and his female passenger, who strapped a baby to her back, were killed in the traffic caused by the reconstruction of this road. Why can’t Julius Berger open the link road?”

A motorist, Tony Okeke, urged the government to hasten the construction, saying, “I have been in the gridlock for over three hours. I have been driving my family all the way from Anambra State, but we encountered the gridlock around the Redemption Camp. This is a terrible experience.”

The Sector Commander, Ogun State, Federal Road Safety Corps, Clement Oladele, said, “If you have four lanes and you reduce it to two, definitely there will be gridlock. But because many people, who drive through the alternative roads, get ahead of those on the normal route, this discourages people and make them start driving against the traffic and compound the situation.

“So, if the alternative route is blocked, everybody will be forced to drive on the normal route and those who are behind won’t be able to jump ahead of those ahead of them. This is an experiment, if it works, it will continue until the road is completed.”

The Federal Controller of Works in charge of the project, Ademola Kuti, said, “The carriageway is the road, people should not start using other routes to join the queue in front; people should be disciplined by following the lane. It is a moving traffic; the only problem is that we can have breakdown of vehicles or accidents.

“The work has started but the diversion started on Tuesday, and all things being equal, we should be able to complete work on that section of the road by February.”