In a statement by IPOB’s spokesperson, Emma Powerful, Kanu said he was ready to support the Southwest security outfit with one million men. 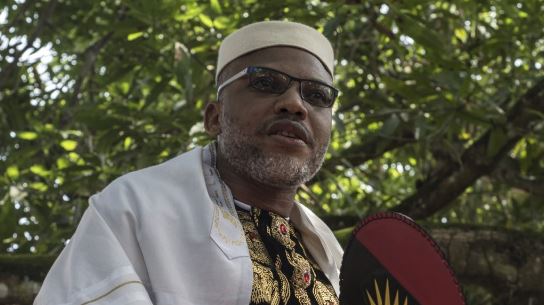 Kanu assured that members IPOB were ready to support Operation Amotekun with all their might.

In a statement by IPOB’s spokesperson, Emma Powerful, Kanu said he was ready to support the Southwest security outfit with one million men.

According to Kanu: “The final and definitive stance of the Biafran people is that IPOB will support Operation Amotekun with all our might.

“Regardless of the history of politics of treachery that may have existed between the East and the West in the past, our leaders have sworn to work with this generation of Yoruba leadership with the likes of Pa Ayo Adebanjo, Yinka Odumakin, Femi Fani-Kayode and Omoleye Sowore at the helm.

“I will support this generation of Yorubas that setup AMOTEKUN. IPOB will work with them. If they want one million men, I will give them to make sure the Fulani Caliphate murderous expansionism is stopped. We will support the Yorubas in all forms and by every means necessary. To hell with the Fulanis.

‘IPOB will back AMOTEKUN Security Outfit. AMOTEKUN is not going anywhere. They are here to stay and IPOB will support them’.

Recall that IPOB had recently commended the Southwest governors for establishing the security outfit.

It has reported that governors from Oyo, Ogun, Osun, Ondo, Ekiti, and Lagos States had a few weeks ago in Ibadan, the Oyo State capital launched the security outfit.

The governors explained that Amotekun was established to curb the issues of insecurity in the Southwest.