The IMN said it would continue holding protests and street demonstrations for the sect leader's release. 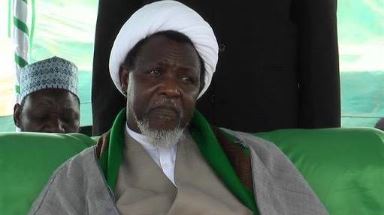 The Islamic Movement in Nigeria (IMN) thursday raised the alarm that their embattled leader, Sheikh Ibrahim El-Zakzaky may die in Kaduna correctional facility if urgent steps are not taken.

IMN accused the federal government of frustrating efforts to take El-Zakzaky for medical treatment, adding that his medical attention is poor.

The group has been demanding the unconditional release of their leader, El-Zakzaky and his wife, Zeenat who are currently being detained by the government in a correctional facility in Kaduna State.

It alleged that the government did not allow his doctors and family members to see the sheikh in prison, claiming that: “the government wants him dead and they are doing everything possible for him not to get justice”.

A member of the Academic Forum of the Islamic movement in Nigeria, Abdullahi Musa, at a news conference in Abuja said the movement feared for Zakzaky’s life.

He, therefore, called for the release of the Shi’ite leader and his wife, Zeenat.

Musa said: “All the efforts to take Zakzaky for medical treatment have been frustrated by the government.

“He was not allowed to see his doctors and family members and he was denied basic needs in violation of the court order which directed that he should be given the necessary care while in prison custody.”

The sect said it would not be cowed by the “deceptive methods” employed by the Kaduna State Government, noting that Zakzaky’s fate was not in the hands of the Kaduna State High Court as stated by Governor Nasir el-Rufai.

Musa noted, “Zakzaky is being denied medication and we fear for his life. There is no reason to hold him, they want him dead. Whatever happens to our leader Sheikh Zakzaky, we know the real culprits, and they alone will shoulder the consequences.”

The IMN said it would continue holding protests and street demonstrations for the sect leader’s release.

Musa said: “The general public should understand the dynamics of atrocities meted on the Islamic movement in Nigeria by the Buhari-led regime. The blame game strategy adopted by the United State, Buhari’s regime and Governor el-Rufai indicates that they are planning for the worst. They want to use the state high court as a cover to eliminate Sheikh Zakzaky.

“We call on the Kaduna State Government to stop deceiving and fooling the public as well. We have details and full records of all the evil perpetrators of the massacre, and unjust persecutions, of our leader. Whatever happens to our leader Sheikh Zakzaky, we know the real culprits, and they alone will shoulder the consequences”.