A police officer has found himself in serious trouble after allegedly killing a youth leader in Abia state. 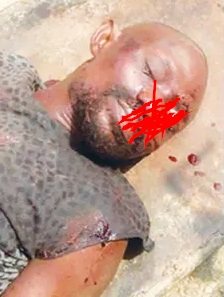 Nwamaka Ogbuji
A police officer has allegedly killed a youth leader during a land tussle between the Enyimba Economic City Land Acquisition Committee and indigenes of Ugwuati community in Ukwa West Local Government Area of Abia State.
It was gathered that the policeman involved was attached to the committee. He was alleged to have shot the youth leader identified as Mr. Nwamaka Ogbuji, who died on the spot.
The incident occurred at a meeting between the team and indigenes of Ugwuati community to finalise the acquisition of land for the much-talked about Enyimba Economic City (EEC) on Wednesday January 15.
Three other people allegedly sustained gunshot injuries and are now battling to live following the shooting which ensued after Ogbuji and other youths insisted they won't be letting go of their lands as they are predominantly farmers.
An eyewitness told New Telegraph:
“The youth were unarmed. They gathered at the town’s hall to listen to the committee members. The youth explained to the delegation that they were not prepared to mortgage their lives for a project they didn’t understand. It was when the arguments started that the policemen that came with the government delegation started shooting indiscriminately. Our people are not stupid. They didn’t fight anybody. They only refused to give out their land to people they didn’t trust.
“Go to Obuaku city, you’ll see how land was acquired there some years back. Now, they have come with this story of Enyimba Economic City, which we don’t believe is a serious thing. The people are even afraid they might use our land for RUGA. You can’t just take away people’s land without their approval.”
Abia State Commissioner of Police, Ene Okon who confirmed the incident accused youths of the community of attempting to snatch the rifles of its men deployed with the team.
He said:
"Last week, the state government wrote and asked us to bring some security to accompany Enyimba Economic City Committee members to attend the meeting. The policemen were sent as requested by the state government. If the community had a problem, they should have sorted it out among themselves. But my information is that the community people disagreed. In the process, the youth trooped out in large numbers, attacked the policemen and abducted members of the committee.
“They attacked the policemen and some of them attempted to snatch rifles from the policemen. As they were struggling, a rifle fired. The bullet strayed and killed one of them, while the other two people were injured.  When I was told, I had to send re-enforcement to rescue three members of the committee that were abducted. That is the extent the youth in the place can be lawless. If you have problem over land with the government, you don’t need to attack people. You take it to the government, not to attack the police or the people sent to do whatever the government asked them to do. They (youths) were armed with machetes.”
Top Stories