An Almajiri teenager's feet has been burnt with coal after he allegedly stole bread from a bakery manager. 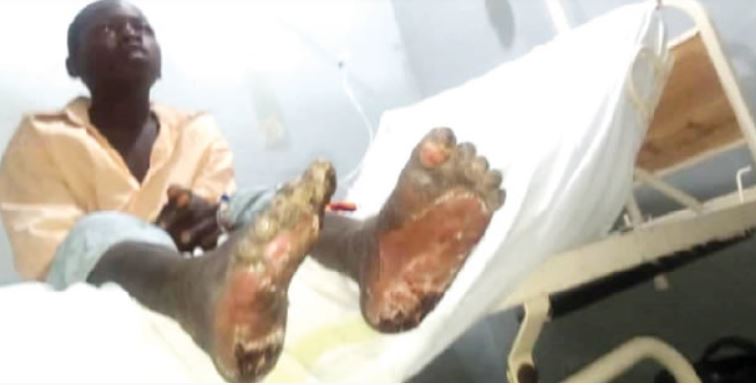 In this report, CHIMA AZUBUIKE highlights the deep pain a 14-year-old Almajiri boy, Nafiu Usman, has been suffering after his feet were burnt in a bakery over an allegation of stealing N80 bread

Many residents  of Gombe State have yet to fully understand  why the feet of a 14- year -old Almajiri boy,  Nafiu Usman, were  burnt in an oven  by a bakery manager,  Idris Abubakar,  at  Bajoga in the Funakaye Local Government Area of Gombe State.

Usman, who is from  Tafawa Balewa,   Bauchi State,  came to Bajoga in search of Quranic  education, but what  he got were burnt feet. The pain he must have felt as his feet were forcefully inserted in a burning oven could best be imagined.

Nafiu’s feet were burnt on December 10 for allegedly stealing bread from a bakery. Although the incident occurred on December 10, he did not receive treatment for the wounds until January 9 at the Federal Teaching Hospital, Gombe.

A nurse confirmed to our correspondent that by the time the boy was brought to the hospital, his feet were already infected.
Investigation by our correspondent showed that Usman had been undergoing treatment in the traditional way before he was moved to the General Hospital in Bajoga and eventually referred to the FTH.

Asked his mission in the bakery, Usman told our correspondent that he went there because he was thirsty and wanted to drink some water. He said, “On our way from the farm where we went to pick beans, we decided to stop at the bakery to drink some water.
The manager of the bakery accused us of stealing N80 worth of bread. He snatched our beans and searched us, but he didn’t find any loaf of bread.

“We were asked to call our mallam (Islamic teacher), but we couldn’t find him. So I was detained by the manager (Idris Abubakar) who is also the son of the owner of the bakery.

“The owner of the bakery wasn’t around at the time of the incident. Abubakar put my feet inside burning charcoal. After sometime, he brought me out and offered me some water before putting my feet in the oven again.
I was beaten with  iron. When my colleagues returned and saw that I couldn’t walk, they had to look for a wheelbarrow to carry me.”

The bakery has been shut down by the Gombe State Government, which ordered a proper investigation of the incident. Reacting, Governor Inuwa Yahaya described the incident as dehumanising and unjustifiable.

The governor, in a statement issued by his Senior Special Assistant on Media, Ismaila Misilli, said it was unacceptable for anyone to inflict such a high degree of pain on a fellow human being for whatever reason.

The statement maintained that Yahaya had ordered the relevant state agencies to follow up on the matter and ensure that the perpetrator of the dastardly act faces the full wrath of the law to serve as deterrent.

It also stated that the state government would pay Usman’s hospital bills, while givin the assurance that his administration would continue to protect the lives of all citizens of the state and to ensure their rights were upheld at all times.

Yahaya charged the people of the state to always report criminal activities to the Police rather than take the law into their hands.

Islamic teacher, Yisa Idris, who owns the school Usman attended, said he was not at home when his pupils were sent to call him. Claiming that he had been operating the ‘Tsangaya’ Almajiri  school for over 20 years, he added that his wards were forbidden to beg for either food or alms.

“I was away and didn’t know what was happening until I saw the children trying to get a wheelbarrow. Then I asked what the wheelbarrow was meant for and they told me Nafiu (Usman) had his feet burnt at the bakery.

Immediately, we went there together and later opted for traditional medicine. It was when a police officer insisted that the case must be reported to the authorities that it ended up in court.

“The suspect was granted bail for claiming he had a medical condition. The judge mandated the owner of the bakery to take responsibility for Nafiu’s medical bills. Quite honestly, I don’t allow my students to go begging fo food. I feed them instead.

On Thursdays and Fridays, when we don’t have anything to do, I make sure we stay together to pray, instead of roaming about. I have been running the ‘Tsangaya’ for over 20 years and I have never got any complaint about any one of them.”

The nurse in charge of Usman’s case, Abdulrasaq Musa, told our correspondent that the boy was referred to the teaching hospital in Gombe from the General Hospital in Bajoga on January 9, 2020.

The nurse added that the boy’s wounds had already been infected before he was referred to the teaching hospital. But on receiving him at the hospital, the casualty officer had invited the surgical team to make an assessment of his case.

A resident of Bajoga, Usman Idris, attested to young Usman’s good character, saying, “I know him (Nafiu) very well. No one has ever accused him of stealing or whatsoever.”

The Chairman of the Civil Liberties Organisation in Gombe, Mohammed Wayas, described the incident as barbaric.
Wayas said, “I was at the Custodial Centre in Bajoga, where I had a discussion with the suspect who put the boy’s feet in burning coal. I asked him if it was true that he was mentally ill and he replied that he was physically and mentally sound. In fact, he confessed that he was a serving corps member.

“Already the case has been taken to court. We will see that justice is done to the poor boy. We will follow the case to a logical conclusion. The young Nafiu did not steal. They just claimed he stole.”

The Commissioner for Justice and the Attorney General of Gombe State, Zubair Umar, in a telephone interview with our correspondent, said he was aware of the case. “All I can say is that the matter is now in court, but I want to assure the entire people of the state that we (government) will prosecute that case well. We will make sure that whoever is found guilty is appropriately punished.”

A social analyst, Dr Oladimeji Lawal,  in another interview with our correspondent, pointed out that Islam as a religion places premium on education. He noted that Islam insists on the need for parents to educate their wards.

He said, “Education is one fundamental thing that a Muslim owes his or her ward. When we say education, it is not limited to Islamic education, but any form of education that one can acquire in life. Islam encourages it.

“However, how we go about acquiring education is more of a cultural thing. The manner or process by which one can acquire education is not specified. If it is a formal setting where people come to teach and go, that is fine. If you have other means by which learning can be carried out without having to go to any place, that is also okay.”

Lawal added that the Almajiri system seemed to have derived from the Islamic Educational system. “Mark the word ‘seems’, because overtime people who propagated Islam were businessmen and women who moved from one place to the other.

“In the olden days, people were not so involved in worldly things. They were dedicated to spiritual activities and so, they moved from place to place. Those who wanted their children to acquire Islamic education chose to take them to these clerics, who had the knowledge and time to do the teaching.  In some cases, these children did not only come to learn, but they also lived with their teachers.

“Along the line, people without the means to take care of their children abandoned their responsibilities. So, in a nutshell, it is wrong to mix acquisition of  Islamic education with the Almajiri system.

“The concept of Almajiri is often viewed in a derogatory sense. It is usually tagged with begging. So it is not the same as acquiring Islamic education, people now use it to abandon their responsibilities to their children.

The Gombe State Police Command, in a press statement issued by the Deputy Public Relations Officer, Yusuf Balami, said the command was on top of the situation.  The statement said, “Arrest was made, the case was properly investigated and the suspect arraigned at the Chief Magistrate court 2, Bajoga. The command will like to assure the general public that the police will continue to discharge their constitutional duties.”