Coronavirus: Dele Momodu Is 'Dashing' His Followers Money On Twitter


The Emir of Kano, Muhammadu Sanusi II, reportedly lobbied to become the Vice President when President Buhari was sick. 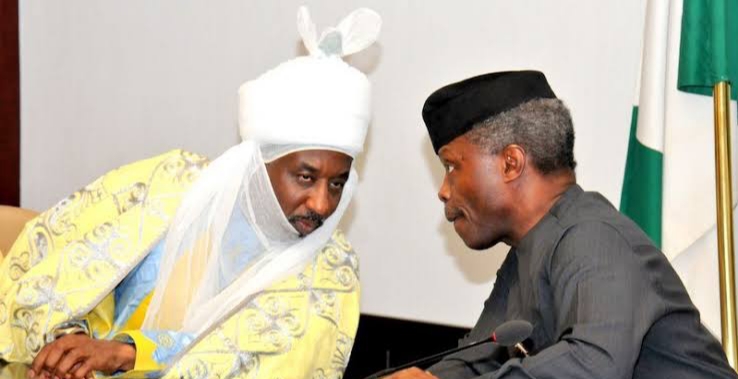 Osinbajo presided over the country when Buhari treated an undisclosed ailment in London in 2017.

Speaking with TheInterview, Mohammed said the emir asked Vice-President Yemi Osinbajo to consider him for the nation’s number two position in the event that the president dies.

The former lawmaker also alleged that Sanusi met with some south-west leaders to canvass support for a presidential candidate aside Buhari.

“Once Buhari was sick, very sick in England, he went to Osinbajo, this current Emir Sanusi; he was sure that Buhari was going to die. And if Buhari dies, he would like Osinbajo to consider him as a vice president, even though on the surface, he belonged to no party,” he said.

SANUSI WANTED TO BE VICE PRESIDENT

“He wanted Osinbajo to consider him as vice president! Now, anybody with any sense of logic, any sanity would not countenance this kind of thing. If for whatever reason, this issue was reported to Buhari, if Buhari were another leader, he would have got rid of him in a jiffy.

“I know for a fact, and I am glad there people involved who will now confirm. The Emir of Kano, when he was governor of Central Bank went to see my friend Bola Tinubu and went to see the current Oba of Lagos, Oba Rilwan Akiolu telling them that a certain presidential candidate was actually the choice of Kano and the choice of the north. So, he would want them to support that person.

“This is not the first time. I am now 70 years old. I am older than the Emir of Kano, who I have known since childhood. And I knew his father and mother.”

On the crisis between Sanusi and Abdullahi Ganduje, governor of Kano state, Mohammed said there is no need to set up a committee to reconcile the duo.

TheCable had reported how Ganduje launched moves to remove the emir, who was reported to have opposed his reelection bid.

The governor broke the emirates into five shortly after the report, stripping Sanusi of the control of 34 local government areas of the state.

NOTHING WRONG IN REDUCING SANUSI’S POWERS

“The emirs are what they are because some people accept the emirate or the institution. I don’t. But even if I were the governor of Kano State, I would not want to demolish the emirate because apparently there are some people who respect the institution. I don’t. But that is another matter completely. But you have to be very careful about warning these emirs to keep away from politics.

“And as far as I am concerned, there is no problem to solve in Kano. If there is a personal quarrel between the governor and the Emir, okay, let them go and sort it out themselves. In trying to get involved in this matter, some people are being deliberately mischievous and they are fighting their own personal fights.

“There was an attempt to reconcile this matter within Kano people. I was in the United Kingdom before Christmas. I traveled with a one time Vice President of this country and we got to discuss this issue.

“The first question he asked is what is the locus of those so called northern elders? Who are they representing? How many of them have ever won elections in their lives? And how many people are from Kano? Of the three people sent to go and have a discussion with Ganduje, none of them is a Kano man.

“In fact, one is a known enemy of Kano State and he has spent the whole of his life abusing and insulting Kano and Kano people. Now you make him among the three people to go and see Ganduje in an issue that, strictly speaking is a Kano issue.

“As far as I am concerned, this issue is not a Federal Government or Buhari issue. It is a Kano issue. And the law that was passed was not a Federal law, which Buhari would have had the responsibility to implement the provisions of that law.

“It was a Kano law. And when the law was quashed on a technicality, they went back and rewrote the law. So what’s the problem? You cannot tell me that because the governor of Kano has taken a decision to split the emirate and create more, the heavens will fall. This is not new, not new in the north, not new in Nigeria.”

When asked for reaction, a palace source told TheCable that Mohammed is a distraction that the emirate would not want to join issues with.

He said the rumour out initially was that the monarch lobbied Osinbajo to make Rabiu Kwankwaso, former governor of Kano, Osinbajo’s vice-president.

On his part, Laolu Akande, spokesman of the vice-president, said: “I don’t react to speculations; it’s baseless.”

Coronavirus: Dele Momodu Is 'Dashing' His Followers Money On Twitter