The victims of the horrific Abule Egba explosion have recounted their sad ordeals as the death toll rises. 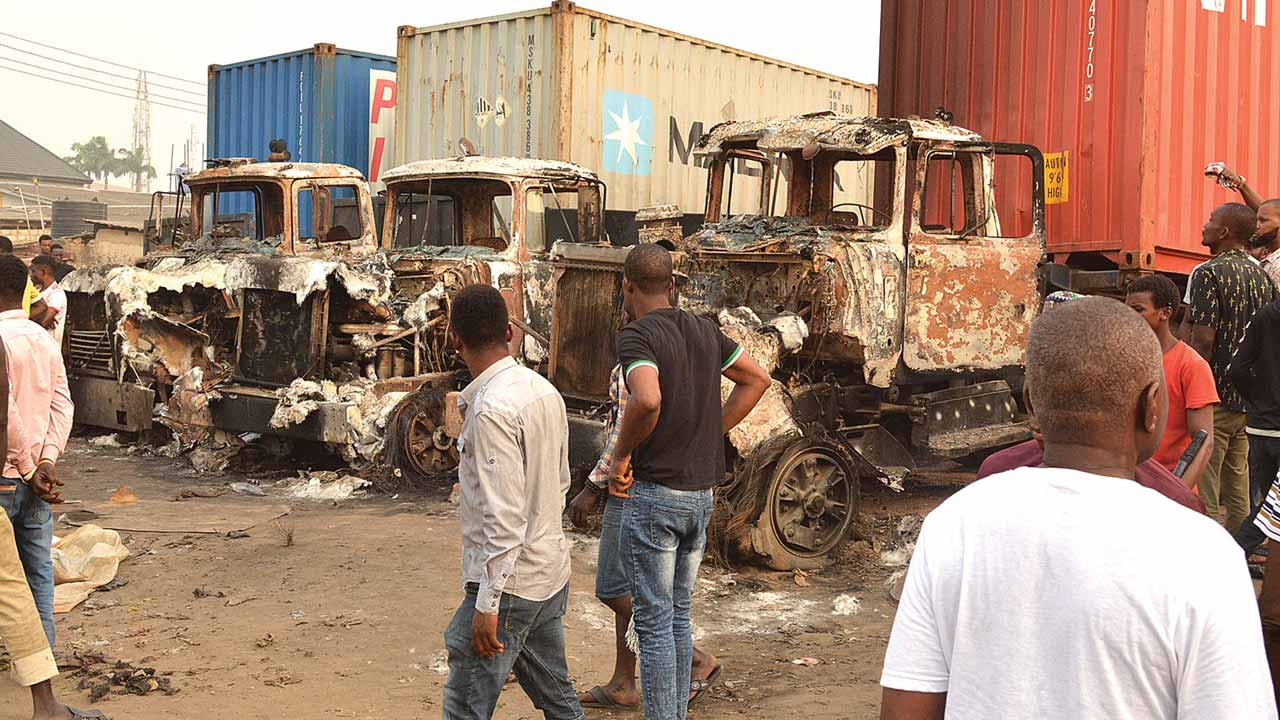 After the raging fire following Sunday night’s pipeline explosion at Abule Egba area of Lagos State was put out by a combined team of firefighters and emergency responders, the death toll rose from two to five persons, comprising three adult males, one adult female and a female child aged three.

When The Guardian visited the scene of the incident yesterday, tales of woe from residents who lost their loved ones and property in the inferno rent the air. According to one Adesoji Ayodele, who lamented losing his property worth millions in the inferno, the government will do a lot of good to not only come to the aid of victims but also put an end to the incessant vandalisation leading to explosions and deaths.

He said: “I was sitting outside my compound for fresh air when I heard a big sound. I was confused until we discovered that the noise was from the pipeline. The next thing that came to my mind was to look for my children and escape for our lives. Before we knew what was happening fire had covered everywhere. When we returned this morning, fire had destroyed our properties. We could not pick anything, all we owned had turned to heap of ashes.

“As I am now, I am frustrated as everything I laboured and suffered for are gone. Where will I start from? This clothing and slippers I am wearing was given to me by my in-laws. The government should come to my aid as I don’t know where to start from.”

Also, Rachel, who lived with her mother in the area bemoaned that the inferno destroyed their property. “The incident started at about 8:00p.m. All we saw was oil, we quickly ran for our lives in order not to be injured but we have lost our property. We are left with nothing.”

Another resident, Steven who lives with a neighbour that lost her life to the fire, simply known as Iya Mariam told The Guardian: “At about 8:00p.m. we started perceiving the smell of fuel when my wife came outside to throw out water, she came back to tell me there was fuel gushing from the gutter. She grabbed our baby from me and ran away. I rushed out see what happened when I saw my neighbour with her baby on her back.

“I advised her to escape for her life but she said she was waiting for her husband. So, I left her and went to pass the night at my friend’s place. I was surprised this morning when they told me she was killed in the inferno. It’s so sad as she was very close to me.”

Mr. Ahmed, a landlord, who also lost his house in the explosion, hinted that two apprentices were trying to move some equipment from the shop when the explosion caught and killed them. “A woman with her baby also died on the spot with two other persons. It was a very sad incident.”

However, despite the widespread devastation from the explosion, a doctor, whose hospital, Oar Medical Centre, was affected, Dr. Ojifini, had cause to thank God that none of his family members and patients under treatment were lost to the fire. The patients in the hospital at the time, including pregnant women, all escaped the fire.

Many people were seen at the hospital yesterday coming to sympathise with the doctor who lost everything in his residential apartment attached to the hospital to the fire. But taking the loss in his strides, he said he is grateful to God he lost nobody in his family or under his care in the hospital to the incident.

“Immediately we started smelling the fuel and sense danger, we decided to move all the patients to a safe place. I saw the fuel gushing out like fountain even though there was no fire at that time but I sensed that there might be danger hence the decision to take everyone to a safe place.

“I am grateful to God that all my patients are all safe and also my family, a lot has gone but we have to thank God for life. So many people came to our aid if not, the hospital would have gone too although the roof is affected but the equipment inside are all safe. Everything in the house went with the fire, including the generator. For now, we are trying to salvage the little we could and move on,” he said.

One of the patients who crave anonymity said it took the ingenuity of the doctor to rescue all the people in the hospital. According to her, another saving grace was that the incident happened in the evening and not when everyone had slept.

She added: “If it was in the night, it would have been worse because some people would have been fast asleep. Those that are weak were carried while those healthier also helped out to take everyone to safety. Fire is not something good at all and government should please do something about these vandals and probably put better security around the pipelines.”

Meanwhile, the Director General of the Lagos State Emergency Management Agency (LASEMA), Dr. Olufemi Damilola Oke-Osayintolu, has urged residents to be calm and report suspicious activities in the axis to forestall future occurrences.

“After several hours of intense fire fighting by the combined teams of Lagos Fire and other agencies, the fire was successfully put out. We were informed by 8:30p.m. by 9:00p.m. we had curtailed it and by 11:30p.m. before midnight, we had put it off. After containing the area at 11:30p.m. we commenced an enumeration of the vehicles and properties that were involved.”

The Public Relations Officer (PRO) of the Nigerian Security and Civil Defence Corp (NSCDC), Lagos State Command, Kehinde Bada, told newsmen yesterday that the explosion occurred as a result of a faulty pipe.

“It is not a case of vandalism as been said. It started from a peg failure. Our men first noticed petroleum products oozing out of the failed portion of the pipe at about 6:00p.m. on Sunday. Officials of the Nigerian National Petroleum Corporation (NNPC) were duly informed and they promptly sent staff from their maintenance department to the area.

“But the explosion occurred before they arrived the area. From our record, five persons died in the fire. They include three male adults, one lady and a child of about three years. 14 houses and 36 vehicles were burnt.”

But Mele Kyari, the Group Managing Director, NNPC, says the corporation is working with security agencies to reduce incidents of pipeline vandalism in the country to the barest minimum, while attributing the explosion to activities of vandals.

Kyari made this known yesterday during an inspection visit to the scene of the explosion in Lagos. He said the NNPC was working with security agencies including the Nigerian Navy, Civil Defence Corps and police in tackling the problem, but also sought support of communities to achieve greater success.

Kyari said: “Unfortunately, this incident has happened and we lost five lives confirmed and there are many people who were injured, and that is very pathetic for us. More importantly, what is happening around the System 2 B Pipeline from Atlas Cove to Mosimi all the way to Ilorin are acts of vandals of all nature along our right of way.

“What they do is that they make insertions into our pipelines, tap petroleum products and at the end it will be disasters we have seen like this. This is happening daily.

“What this portends is danger to all of us. If this incident had happened under a windy condition yesterday, then we would have been talking of thousands of people dying.”