A man has been apprehended after he was caught picking female pants and bra for money ritual. 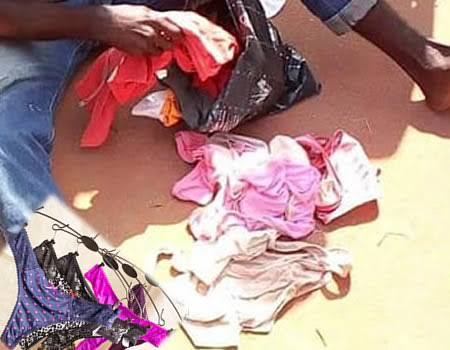 Man caught picking female pant for money ritual
It has not been easy for women in Lagos and beyond following the reportedly high demands for their used pants, bras and sanitary pads for money ritual purposes.
PM Express reports that Police operatives from Olosun Division, Lagos, led by the Divisional Police Officer, SP Ayodele Arogbo, have arrested a 20-year old man, who specialized in stealing female pants and bras for sale for money ritual purposes.
The suspect, Ugochukwu Okoye, was caught at 22 Olanibi Street, Mushin area of Lagos, while stealing the items. He was arrested and taken to the Police Station for interrogation.
The Police alleged that he confessed that he usually picks up female under wears, which he sells to undisclosed persons now at large.
He reportedly confessed to the Police that female under wears were needed by undisclosed persons, who buy the items for money ritual purposes.
After interrogation, the Police found him culpable and charged him before the Ogba Magistrates Court for stealing.
He pleaded not guilty.
The prosecutor, Inspector Edet Ekadu, then asked the Court to fix a date for hearing since he pleaded not guilty to enable the Police to prove that he actually committed the offence.
The Presiding Magistrate, Mr. K.O. Ogundare, granted him bail in the sum of N100,000 with two sureties in like sum. He was remanded in prison custody pending when he will perfect his bail conditions. The matter was adjourned till 6th February, 2020.
PM Express gathered that the situation has became worrisome for women, who now have to guard their under wears whenever they wash and hang them outside because of persons with dubious minds.
While some hang theirs inside their apartments, they are unsure what will happen when they have gone to work.
Top Stories

See What The Streets Look Like On Day Two Of Lockdown Across Lagos, Abuja (Photos)
Popular Stories