Other residents, who spoke with newsmen, blamed the crime on the blackout and lack of security in the area. 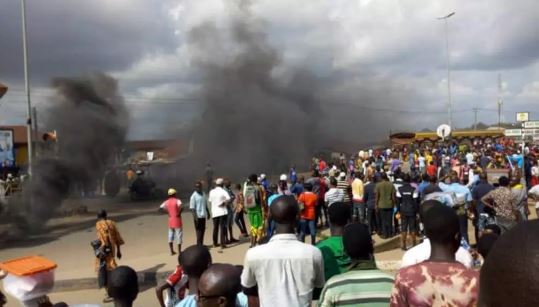 From an eyewitness report, “the incident occurred at about 09:00pm, when the pregnant woman alighted from a motorbike.

“She was immediately surrounded by four armed men who took away her handbag, her (the pregnant woman) screams made the motorcyclist
to return to the scene of the incident and two out of the four men had escaped while the remaining two were apprehended.

Another eyewitness and resident of the area, who pleaded anonymity, said the aggrieved motorcyclist, who immediately alerted others, engaged in a battle with the hoodlums and rescued the woman who had sustained a severe hand injury in the process.

“Luck ran out of two of them when they were overpowered by many men who beat, stoned them with building blocks and locked them up in the same tunnel and set them ablaze.”

Another resident of the area, Mrs Arit Archibong, regretted that the flyover area has been a den of criminals for some years now, adding that about four rape cases were reported within the tunnel in December 2019.

Other residents, who spoke with newsmen, blamed the crime on the blackout and lack of security in the area.

However, the Police Public Relations Officer, Akwa Ibom State Command, SP Odiko Macdon, in reaction, frowned at the jungle justice, stressing that such act has no place in the law.

“It is unfortunate that they were already set ablaze before we got there. Jungle justice has no place in the law. Every accused is innocent until proven guilty by the law.”

The PPRO, who cautioned that the command would no longer tolerate such acts, declared that it was better for nine thieves to be allowed unpunished than for one innocent person to be killed in error.

“We have liaised with the state waste management authority to evacuate the remains while investigations are ongoing to unravel those behind the act,” Macdon said.