Ronaldo will now hope to lead Juventus to victory when they take on Napoli in their next fixture. 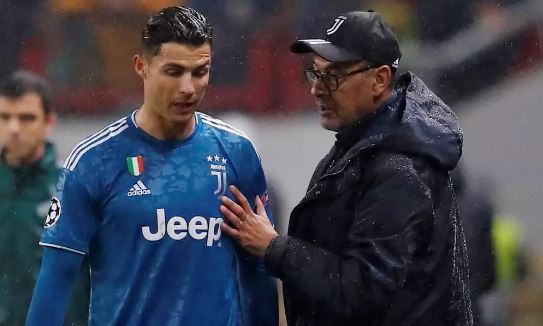 Juventus manager, Maurizio Sarri has hailed forward, Cristiano Ronaldo as an ‘extraordinary’ player, following their 3-1 win over AS Roma in the Coppa Italian quarter-final encounter on Wednesday night.

Sarri’s men defeated Roma to qualify for the semi-final, thanks to three goals from Ronaldo, Rodrigo Bentancur and Leonardo Bonucci.

Speaking after the match, Sarri told post-match news conference as quoted by Goal: “Winning is becoming normal. “I’m happy for the team.

“But we don’t have to look at the numbers because it will be more difficult this year. We will certainly have to do better than previous years if we want to be competitive in the league.

“Ronaldo is in extraordinary physical and mental condition,” Sarri added. “He is continuing at an impressive pace and has extraordinary skills.

“He is very well physically. In terms of explosiveness, he is good. He takes great care of the details.

“Ronaldo is a champion, we want to help him win the sixth Ballon d’Or, it would make us all happy.”

Ronaldo will now hope to lead Juventus to victory when they take on Napoli in their next fixture.