Why Nnamdi Kanu Was Not Present In Court Today – Ejimakor


Friends of the royals, Oprah Winfrey and Gayle King say nobody has the right to question Meghan Markle and Prince Harry's decision to leave the royal family. 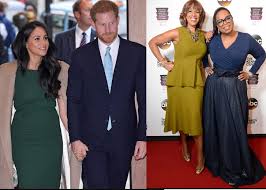 Meghan Markle's close friends, Oprah Winfrey and Gayle King have defended the Duke and Duchess of Sussex over their decision to quit the royal family.

Oprah, 66, who is a good friend to both Prince Harry, 35, and Meghan Markle, 38, insisted that nobody 'has the right' to question their decision.

She made the comment after being stopped by TMZ reporters while walking with Gayle, 65, in New York last night.

In her words, she said that she supported the Sussexes '1,000 percent' in their decision to step back from the royal family, adding that she believes Prince Harry 'did what he needed to do for his family.'

As for Gayle, she also defended the couple, insisting: 'Prince Harry didn't make that decision in a vacuum. There were a lot of conversations.'

Oprah then commented again: 'I support them 1000 per cent. I support them because I believe that when you have thought about this as long as they have... And even in the Queen's statement, take note, this has been going on for months.

'These discussions have been going on for months, so when you've thought about it for months...'

The media executive also went on to praise Prince Harry's speech on Sunday night at Sentebale charity dinner as he spoke about stepping down from the royal family.

She said: 'When he gave the charity statement for Sentebale, the last line of his statement where he said, he had to make the decision to back away from his family in order to move forward in peace with his new family...'

'I don't know how they came up with those words, but who doesn't feel that?. Who doesn't have feel what it takes to make those decision, to give up everything you've known your whole life, to say "I am going to choose this new life and what I believe to be the truest vision to myself?".

'Who are any of us to stand in judgement of that? That's what I think.'

When asked if she found the move inspiring, Oprah said: 'I wont even say inspiring, I'm saying he did what he needed to do for his family. That's his decision to make for him and his family.'

Meanwhile, Gayle added: 'They didn't make that decisions in a vacuum. There were a lot of conversations, and that's why I thought it was very unfair to say that the Queen was blindsided.

Turn To Your Neighbour And Say, Are Classic Hypnotic Spells Used By Pastors – Reno Omokri