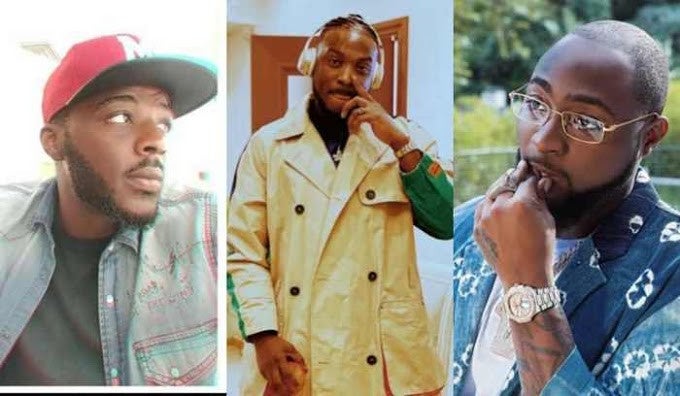 King Patrick, Peruzzi and Davido
It seems like the beef between Golden Boy Entertainment CEO, Patrick Anyaene aka King Patrick, DMW boss Davido and Peruzzi is not ending any sooner after the Golden Boy Entertainment CEO made new damning allegations against Peruzzi, Davido and Chioma.
The record label boss made the allegations while chatting with music channel, Hip TV.
During the interview, Patrick kept on stressing that Davido pays him for using songs which had already been produced under his record label, Golden Boy Entertainment.
The music executive also disclosed that the DMW boss has been begging him to drop the matter behind closed doors.
He claimed that Davido had once spiked his drink but he survived the incident. He ended the call with a shot, stating that Peruzzi had written the song, ‘Fia’ to taunt Davido over Chioma.
Recall that just last week, Patrick had made a shocking revelation after voicing his frustration on the matter concerning DMW, a record label owned by Davido and Peruzzi over an alleged breach of contract by Peruzzi, as he claimed that the matter was been delayed in court.
In a 17 tweet thread this month, Anyaene narrated how he met Peruzzi and helped him return to school during a turbulent phase of his life.
He also claimed that Davido helped Peruzzi in breaching the contract he had with Golden Boy Entertainment.
Listen to the audio below:
Top Stories