Femi Adesina has called out the Christian Association of Nigeria over the way they reacted to the killing of Adamawa pastor. 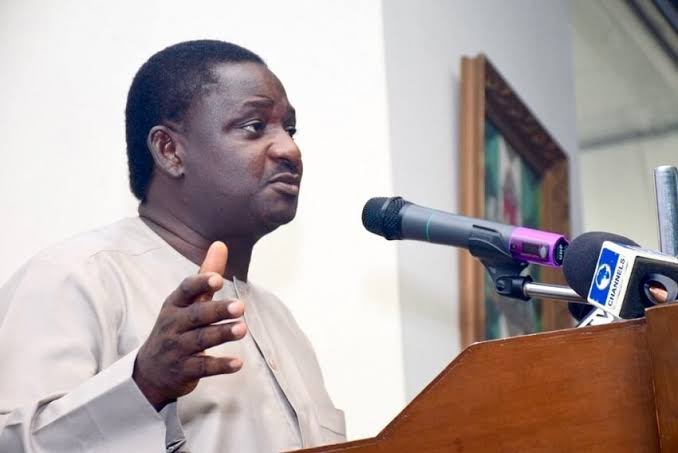 Special Adviser to President Muhammadu Buhari on Media and Publicity, Femi Adesina has called out the Christian Association of Nigeria (CAN), asking them not to ”mix bias and sympathy” following the recent beheading of Reverend Lawan Andimi, the Chairman of CAN in Michika Local government area of Adamawa state by Boko Haram insurgents.

“It was very sad and doleful to hear of the eventual beheading of Rev Lawan Andimi, Chairman of Christian Association of Nigeria (CAN), Michika Local Government, Adamawa State. He had been abducted by terrorists earlier this month.

“I felt the killing of Andimi very keenly, not for the fact that he was a clergyman, but “any man’s death diminishes me, because I’m involved in mankind.” (John Donne).

:No man should die the way Rev Andimi was killed. Beheaded by insurgents, who then proceeded to gleefully announce his decapitation. It should not happen. Evil and senseless. It is classic example of man’s inhumanity to man, and those who did it have long lost their humanity, if they ever had any.

“President Muhammadu Buhari has sympathized with the family and relations of the dead. I have also been in a state of melancholy over it. May God have mercy.

“I am mourning Rev Andimi, not just because he was a cleric, but because he was a human being. And my distress was increased by the statement issued on the tragic event by the central body of CAN. Too many things were mixed together, which the apex Christian body in the country should have been mindful of, lest it departs from the mind and essence of Jesus Christ, our perfect example.

“For years, since he emerged on the national scene as a military leader, and later as an aspirant for the highest political office in the country, and eventually as President, spirited attempts have been made to position Muhammadu Buhari as anti-Christian faith. It worked against the man for a long time, till majority of Nigerians saw through the smokescreen, and made up their minds against the demonization.

“That was why as much as some church leaders tried to dress Buhari in borrowed robes in 2015 and 2019, millions of Christians went ahead to vote for him. The inexorable truth is that in Nigeria, Muslims can’t wish Christians away, and vice-versa. We shall all stay here, and salvage it together.

“However, the statement by CAN on the death of Andimi gives hint that the leadership of the Christian body still harbors some of the old narratives that have been discredited, and from which majority of people have purged themselves, except the willfully irredeemable.

“Hear CAN, through its Director of Legal and Public Affairs, Evangelist Kwamkur Vondip, speaking for Rev Samson Ayokunle, President of the body: “Maintenance of security is the least responsibility of any government that knows its worth. We are once again calling on President Buhari to purge himself of the allegations of nepotism and religious favoritism by reconstituting the leadership of the security forces.”

“Let’s consider this part of the press statement. Maintenance of security is the least responsibility of any government that knows its worth. Not news. The Constitution says so. But don’t you glean a hint of bile and bias in “that knows its worth?” Oh, CAN, this is not the mind of our Master. He gives praises when due. Security is number one on the priorities of the Buhari administration. It has pumped time and humongous resources into it, and while the job is not fully done, we are not in the same position we were before the administration came. At least, to those who want to be honest. And CAN should be honest. That is what we’ve learnt from our Master.

“There were times bombs used to go off in this country like firecrackers, and deaths were in many scores. Now for months on end, you may not hear of a single bomb blast. Emirs that had fled their palaces, like those of Askira and Uba, have returned after two years. Secondary schools that were shut for two years in Maiduguri have reopened. Roads long closed due to activities of insurgents are back in use. Kidnappers are being arrested in droves in different parts of the country. Clashes between farmers and herdsmen are reducing to the barest minimum. Yet, CAN is talking about a government that knows its worth? The Buhari government does, and honest Nigerians know it, and wish it more successes. Security, in any country of the world, can only be work in progress.

“Hear again: We are once again calling on President Buhari to purge himself of the allegations of nepotism and religious favoritism…Wait a minute. If any purging is to be done, is it not by those making allegations? The allegations lasted for many years, but truth eventually overtook them. If CAN would then still dwell on the discredited accusations, it must be the one to purge itself, as millions of Nigerians, including Christians, have already done. The insecurity in the country is not about any religion. It is pure evil, from the pit of hell.

“If the leadership of the security forces would be changed, it is a sitting President that has the prerogative. It will not happen when CAN begins to make such demand in what should be a sober condolence press statement. Don’t mix bias and sympathy. They don’t mesh.

“And then, this completely reckless portion of the statement: “In the light of the current developments and the circumstantial facts surrounding the prevailing upsurge of attacks against the church, it will be difficult for us to believe that the Federal Government is not colluding with the insurgents to exterminate Christians in Nigeria, bearing in mind the very questionable leadership of the security sector that has been skewed towards a religion and region.”

“Holy Moses! Did CAN say this? Shameful and ridiculous. These are the things that sow malice and animosity in the country, and a Christian body is not expected to be involved in such. You can’t sow discord, and expect concord.

“In that statement, the Christian body urged the Federal Government to ensure the release of the prisoner of faith, Leah Sharibu, and hundreds of victims who are in Boko Haram and ISWAP captivity. It equally called for three days fasting and prayers by Christians in the country. Good. The role of the church is not just in making snide remarks and statements, it is in what the Good Book calls “the demonstration of the Spirit and power.” When Herod locked Peter up, and was going to behead him, the early church prayed fervently, and Peter was rescued miraculously the night before. Rather than cast the government as omnipotent, it is God that has all powers. And some things are never resolved spiritually except through prayer and fasting. It is not me that said so. Jesus did. So, let the Church be fully involved in supplication for divine intervention in the country, rather than playing subtle politics and unwittingly generating hate in the land.

“CAN says kidnappings and killings are shameful to a government that boasts that it has conquered insurgency. Boasts. So that is all that matters to CAN, as if it was an opposition political party? Boasts. No. This would not augur for unity and cohesion in a country. We are not asking the Christian body to be in bed with government, that would not help anybody, but the organization has been sounding too long like a political party. We daily learn to walk with Jesus. His spirit is not an unduly critical one. And He left us an example “that ye should follow in his steps.”

“Rev Andimi was not killed solely because he was a Christian. Those evil people kill anyone they lay their filthy hands on.

“May Andimi’s soul Rest In Peace. May his loved ones be comforted. And may evildoers get their recompense, and fast too. Amen.”