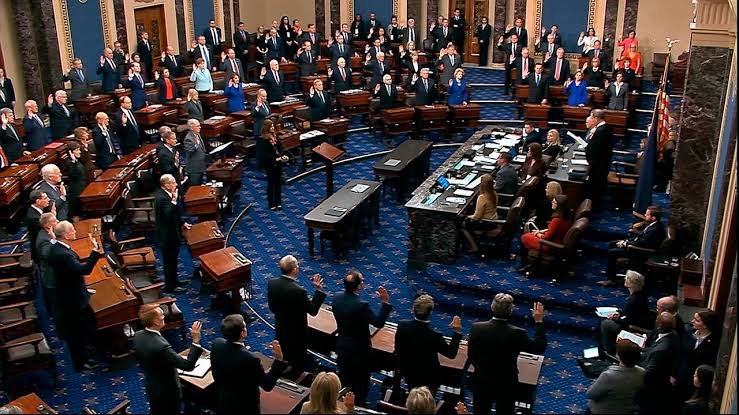 US assembly
US senators have been accused of falling asleep, playing games and breaking other rules during President Donald Trump's impeachment trial.
Jim Risch and Jim Inhofe are among members who have apparently nodded off during the lengthy hearings.
Crossword puzzles, fidget spinners and at least one paper airplane have been spotted with senators.
The trial has heard that Mr Trump's alleged abuse of power threatens American democracy.
The senators are acting as the jury to decide whether the president should be removed from office.
The upper chamber of US Congress prides itself as a hallowed sanctum of decorum.
But some of its members - Republican and Democrat alike - have this week been accused by US media of acting like bored schoolchildren.
The rules call for senators to remain seated during the impeachment trial.
But at least nine Democrats and 22 Republicans left their seats at various times on Thursday, according to Reuters news agency.
They included Democratic White House hopefuls Bernie Sanders, Amy Klobuchar and Michael Bennet.
Marsha Blackburn, a Tennessee Republican, defended herself on Thursday after she was spotted reading a book in the chamber.
''NO CRIME NO IMPEACHMENT IS THAT THE RULE"
She tweeted that the tome - How Trump Haters Are Breaking America, by Kim Strassel - "provides good insights into today's proceedings".
"Busy mamas are the best at multi-tasking," she added. "Try it."
Mr Risch, a Republican who chairs the Senate Foreign Relations Committee, was seen this week slumped motionless with his eyes closed at his desk during the hearings.
A spokesman for the Idaho senator denied he had been asleep, telling the Wall Street Journal he was just listening closely "with his eyes closed or cast down".
Mr Inhofe, an Oklahoma Republican, was spotted on Wednesday by an NBC reporter appearing to briefly doze off before he was nudged by Senator Todd Young, an Indiana Republican who sits next to him.
Mark Warner, a Virginia Democrat, was observed leaning on his right arm with his hand covering his eyes for 20 minutes.
On Thursday, Richard Burr, a North Carolina Republican, handed out fidget spinners, a children's toy, to fellow senators to help them while away the hours in the chamber.
"I saw somebody grab up a few of them, so they must have some real anxiety going along with this," said Mike Braun, an Indiana Republican. He said he did not require one of the gizmos.
Phones, laptops and tablets are a regular accessory during normal Senate hearings, but all electronics have been banned in the chamber for this trial, leaving many restless.
Pat Leahy, a Vermont Democrat, was heard drawling "my precious" as he retrieved his phone from the cubby outside the chamber.
Some senators have apparently found a way around the strict rules by wearing smart watches.
Rand Paul, a Kentucky Republican, reportedly worked on a crossword puzzle and made a paper airplane as Democratic prosecutors laid out their case on Wednesday.
Massachusetts Senator Elizabeth Warren, a Democratic front-runner for the 2020 White House nomination, was spotted by an ABC News reporter playing an unspecified game on paper.
Talking is banned on the floor during arguments and senators are daily admonished by the Senate sergeant-at-arms to remain silent during proceedings "on pain of imprisonment".
But on Wednesday, two Republicans - Tim Scott of South Carolina and Ben Sasse of Nebraska - threw caution to the wind and began whispering after hours of passing notes to each other.
There are also strict rules against food, but senators have been spotted munching chocolate and chewing gum.
Press access to the chamber has been heavily restricted during the Senate trial, meaning there are fewer cameras to catch senators' unguarded moments.
But other senators have appeared to pay close attention to the trial with some diligently taking notes.
Marco Rubio, a Florida Republican, was observed scribbling away with what appeared to be a quill pen.
Mr Trump is only the third president ever to be impeached, but he is unlikely to be convicted in a chamber that is controlled by his fellow Republicans.
Before Thursday's arguments began, some Republican senators said they had heard nothing new in Democratic prosecutors' arguments and had already made up their mind to clear the president. A two-thirds majority votes is required to remove Mr Trump from office.
-BBC News
Top Stories