Men of the EFCC have apprehended and arraigned two brothers who bought expensive properties while feigning to be agents of EFCC. 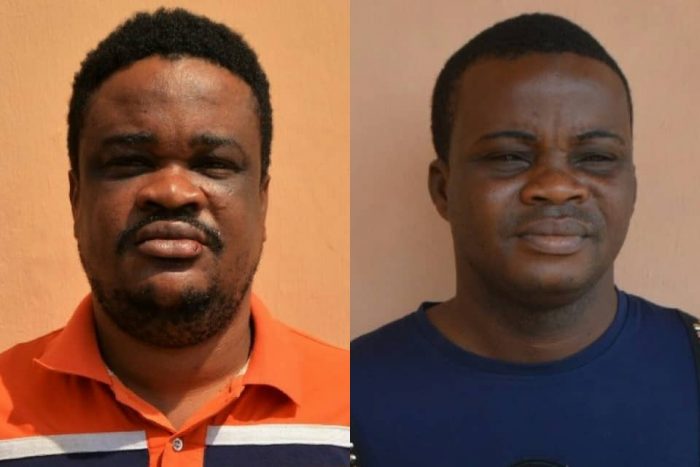 Olatunji Beyioku and Oluwayomi Oluwafemi Beyioku
The Ibadan Zonal office of the Economic and Financial Crimes Commission, EFCC, has arraigned two siblings, Olatunji Beyioku and Oluwayomi Oluwafemi Beyioku for allegedly presenting themselves as agent of the commission to defraud members of the public.
The duo were on Thursday, January 23, dragged before Justice Mohammed Abubakar of the Federal High Court 1, sitting in Abeokuta, Ogun State capital, on 18-count charges bordering on conspiracy, impersonation, forgery, money laundering and obtaining money under false pretenses.
According to the charges, the accused persons allegedly laundered over N12 million and also defrauded unsuspecting victims of the sum of N404 million.
The facts of the case revealed that the brothers had represented themselves as operatives of the EFCC in order to gain undue advantage of their victims.
The charge also stated that Oluwayomi forged a document to claim that he bagged a Higher National Diploma, HND, from the Lagos State Polytechnic and one other that claim that he participated in the one year mandatory national youth service for degree holders.
The duo were found to have made millions of naira engaging in series of fraudulent activities, using the proceeds to purchase a multi-million naira building, two cars – Honda Accord Crosstour and a Mercedes Benz GLK, different brands of mobile phones and other landed properties worth millions of naira.
The accused persons pleaded not guilty to the eighteen-count charge.
Upon their not-guilty plea, EFCC’s counsel, Festus Ojo prayed the court for a trial date and an order to remand them in correctional custody. However, their counsel, Femi Meyile, prayed the court to admit them to bail.
Justice Abubakar allowed the prayer as he granted them bail in the sum of N5 million with one surety each in like sum. The sureties were also ordered to deposit their international passports with the Chief Registrar of the court.
The case was adjourned to March 9, 2020, for trial while the accused persons are to be remanded in the correctional custody pending the perfection of their bail conditions.
Top Stories