The Policeman was murdered at the palace of the chief while trying to arrest one Moses Peter, aka Dogo, a suspect wanted for culpable homicide. 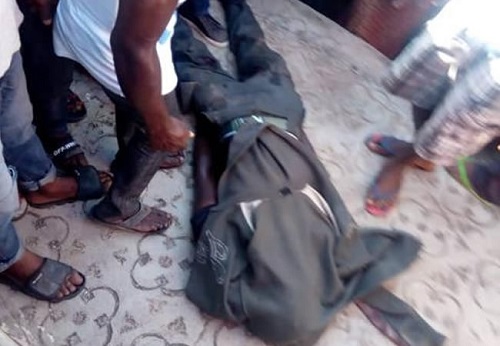 Body of the policeman who was killed during the robbery.

The FCT Police Command has arrested the Chief of Ushafa in Bwari Area Council, Alhaji Mohammed Baba, following the alleged killing of a police officer by a mob at his palace.

The command Public Relations Officer, DSP Anjuguri Manzah, disclosed this in a statement in Abuja.

He said the secretary to the chief’s palace, Mr Danlami Busa, was also arrested in connection with the case.

Manzah said ASP Eric Isaiah was murdered at the palace of the chief while trying to arrest one Moses Peter, aka Dogo, a suspect wanted for culpable homicide.

He said one Domnic Emmanuel, had on January 21, reported at Bwari Police Divisional Headquarters that his brother, Moses, engaged to work as a mason was found unconscious after being attacked and severely injured.

According to Manzah, the brother told the police that Moses was rushed to Bwari General Hospital for medical attention and was able to provide vital information as to his assailants before he died.

He said Dogo and one John (surname unknown) were fingered as the alleged perpetrators of the act.

According to him, on the strength of this, the Bwari Divisional Police Officer detailed his detectives to visit Ushafa village and make inquiries on the matter.

He said the detectives sighted and accosted Dogo, who resisted arrest and invited his friends from a nearby drinking joint to intervene.

Manzah said his friends insisted that the suspect must be taken to the Chief of Ushafa palace before the police could effect his arrest.

He said the two police detectives obliged the crowd and went to the chief’s palace, where they met the secretary to the chief.

“Instead of addressing the issue, the chief’s secretary, at the instance of the Chief incited the crowd, who descended heavily on the two detectives.

“As a result, a re-enforcement team led by late ASP Eric Isaiah, Patrol and Guard Officer, Bwari Division, with three others were deployed.

“They arrived the scene with a police hilux vehicle which was used to rescue the two officers who escaped with the suspect, Peter aka Dogo.

“Sadly, the crowd brutally attacked and murdered ASP Eric Isaiah in cold blood after inflicting injuries on other members of the team,” he said.

Manzah said the Commissioner of Police in charge of FCT, Mr Bala Ciroma, had condemned the murder of the officer, describing it as barbaric and unpatriotic.

He said the CP had directed that the killers of the police officer be arrested and brought to justice.

The PPRO said the CP had warned that the command would not treat an attack on police officers while on lawful duty with levity.