Stories have been told about the innocent people who tragically died in the Lags pipeline explosion. 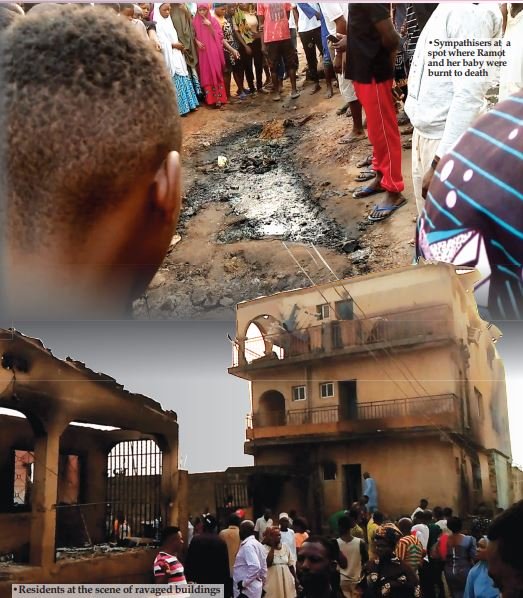 KUNLE AKINRINADE reveals the hidden details of the disaster that rocked the Abule Egba suburb of Lagos, following the outbreak of a pipeline fire that resulted in many deaths early in the week.

Last Sunday was a black one for residents of Abule Egba, a suburb of Lagos in Agbado-Oke-Odo Local Council Development Area. A ravenous fire occasioned by a pipeline explosion claimed no fewer than six lives, while scores of vehicles, buildings and shops in the area were also burnt.

The explosion, which occurred at about 8.30 pm, according to residents, was triggered by vandalised pipelines belonging to the Nigeria National Petroleum Corporation (NNPC) in the community.

Official figures released by the Lagos State Emergency Management Agency (LASEMA) put death toll at five, while the number of buildings razed was put at 37. Scores of people were also wounded in the explosion,which ravaged Ekoro community, Pipeline road, Igoke Estate as well as Ahmed Sodiq and Joel Inadede streets.

The tragic death of a woman, identified simply as Hajia Ramot, and her baby gives the shivers. Eyewitnesses on Ahmed Sodiq Street said Ramot was running away from the fire that had engulfed her residence, holding her baby girl to her chest when she stumbled and fell. She was instantly consumed by the raging fire.

Oblivious of the fate that had befallen Ramot, her innocent baby, who had slipped off her arms when she fell down, crawled to a spot near a slab in front of a razed building on number 8 on the street where her mother was burning, and was also burnt to death.

Waliu Akanbi, a resident, said: “The fire had gutted the woman’s house and she was trying to run into safety when fireballs from the adjacent building at number 8 fell on her. She fell down and was burning.

“The innocent baby who had slipped off her arms walked up to her while she was burning and was also roasted. It was such a gory sight as everyone battled to save their lives. Their charred remains were evacuated this morning.”

Another witness, Rasheed Anifowoshe, recalled how a toddler also died from the smoke he inhaled while looking for his parents as the fire raged.

“I don’t know the boy’s name, but he was not burnt to death,” said a resident.

“The toddler’s parents were not in sight, so he was looking for them. But the smoke had engulfed the atmosphere so much so that those who survived were coughing seriously. The poor toddler was caught in the thick of it and was suffocated.

“Where he died was close to the bus stop near Ekoro, opposite the makeshift office of the operatives of the Nigeria Security and Civil Defence Corps (NSCDC). His charred body was evacuated after the fire was put out.’’

Among the gruesome deaths were those of a trainee welder and his boss. The deceased trainee, who, according to highly placed sources, had just finished his apprenticeship and was retained as a journeyman by his unnamed boss, was said to have visited one of his sisters who is a hair stylist at the Alirat Junction on the adjoining Old Ota road, where he revelled with some of his friends.

He was said to have returned to his workshop on Pipeline Road and slept in one of the trucks brought for body work when the explosion occurred. In his bid to save his boss, who was also sleeping in the driver’s seat of the vehicle, he was burnt to death together with the boss.

A mechanic in the area, who spoke with our reporter in confidence, said: “The boy had just returned from his sister’s shop and decided to sleep in a truck near another one in which his boss slept. There was need for them to sleep there because there were jobs they had to deliver. They thought of seizing the opportunity of the power supply that is usually available in the night to finish the body work on the vehicle.

“Unfortunately, the boy woke up to see fire ravaging the area. It was this time too that his boss was trying to quickly move the truck from the scene, but the vehicle caught fire.  The young boy then tried to save his boss from death but was also consumed with him.”

It was gathered that the apprentice panel beater was already preparing for his graduation ceremony before his tragic death.

Our reporter’s attempt to speak to the boy’s distraught sister failed as she sent word through an emissary that she was not willing to speak on the incident.

The emissary said: “She asked me to tell you (reporter) that she does not want to speak on the matter because of the turn of events. Some misguided persons are already saying that those who died in the fire were pipeline vandals, and it is so disgusting to hear that.

“Her late brother was not a vandal at all. She even pleaded that you should not publish any report on him.’’

The residence of an octogenarian, identified simply as Pa Araokanmi, was also razed. By the time neighbours realised that the old man was trapped in the building, he had been burnt beyond recognition. He was rushed to Ikeja General Hospital, where he died a few hours later.

A source said: “Pa Araokanmi moved in here last year when his house at Oju-Irin in Agege area collapsed.

“When the explosion occurred, everyone was running helter-skelter, hence no one remembered that the old man was inside the house until a few hours later.

“By the time neighbours forced their way into his apartment, he had been severely burnt and was rushed to Ikeja General Hospital.

“He later died in the hospital and his body has been deposited in the morgue.

“His daughter, Keji, has just left here and she is still in shock.’’

Providence saved a creative studio owner, Oluwaseun Bamis, and one of his clients, Tayelolu Shogunle, when moments before the explosion, a prophet based in Oshogbo, Osun State, told the latter on the phone to leave the scene where he was having a chat with Bamis.

Bamis said: “I had a business appointment with Shogunle, who is my friend and client. He asked me to meet him at a spot on Pipeline Road where the explosion occurred.

“While we were discussing, he got a call from a prophet from Oshogbo, Osun State, and the prophet said that danger was looming where we were having the meeting.

“The prophet then warned him to leave the place immediately. It was not up to 10 minutes we left the area when the explosion occurred, killing many people and destroying houses.’’

How it all began

Early reports indicated that the explosion started around 8 pm from a point on the pipelines left open by suspected vandals after siphoning fuel from it. Some residents said the fire started a few minutes after the vandals had filled no fewer than 24 fuel tankers, each with a capacity of 33,000 litres.

However, impeccable sources told The Nation that the suspected vandals had only come to clear the way for their clandestine operation, usually carried out in the night, without properly covering the point they opened on the pipeline, leading to the explosion.

A resident, Dave Okunebe, said: “It is true that the incident was caused by pipeline vandals. And it was not the first time they would be siphoning fuel from the pipelines since the beginning of the year.

“However, they only came on Sunday evening to open the point and covered it with sand so it would be easy for them to siphon fuel in their night operation.

“They left the place thinking that they had properly covered the point, but fuel started gushing out into the network of drainages in the area shortly after they left.

“We noticed that fuel was spilling into the gutters and drainage network around 6pm. Residents then agreed not to light fire or strike matches in order to remain safe.

“But what we feared eventually consumed lives and property, leaving us with grief and sorrow.’’

It was also gathered that concerned residents rushed to the Civil  Defence operatives stationed in the community to protect the pipelines but were allegedly rebuffed by the minions of law, who, according to sources, were busy drinking binge.

“Concerned residents, especially women, rushed to the base of the Civil Defence corps, which was a stone’s throw from the uncovered or exposed pipeline, but the operatives allegedly rebuffed them, warning the women against polluting their beer with saliva,’’ a source in the community said.