A leading member of the All Progressives Congress, Abdulmumin Jibrin Kofa has suffered defeat in the hands of his PDP opponent. 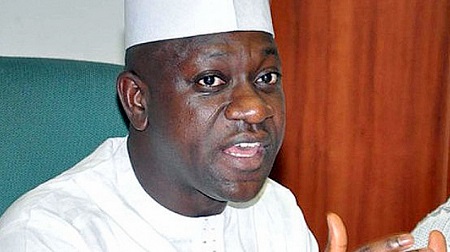 Abdulmumin Jibrin Kofa
Former Chairman, House of Representatives Committee on Appropriation, Abdulmumin Jibrin Kofa has lost his bid to retain his seat at the house after suffering defeat in the hands of Peoples Democratic Party, candidate, Datti Yako at Saturday’s rerun election in Kiru/Bebeji Federal Constituency, Kano State.
Declaring the election results, the Independent National Electoral Commission, INEC returning officer of Kiri/Bebeji Federal Constituency, Professor Abdullahi Arabic, on Sunday, said Yako polled 48,601 votes to beat Kofa, who got 13,587 votes.
Reacting, Jibrin said his mandate was stolen but he has accepted defeat.
The former Chairman while speaking to newsmen in the state after the election results was declared by INEC on Sunday, maintained that forces were applied to deny his supporters the chance to exercise their voting franchise.
“My constituents came out en mass to exercise their civic responsibility but were denied their franchise to vote the candidate and party of their choice through the application of maximum force in all the wards of our constituency except my home town of Kofa, Bebeji that proved impenetrable. We know we won the election fairy and squarely but our mandate was stolen.
“In many units, elections never took place. The ballot boxes were diverted but scores were miraculously entered. The violence, thuggery and rigging that took place have been carefully documented, at least for posterity. I have strong reservations about the outcome of the elections.
“However, INEC has announced my opponent as the winner of the election.
“Police, other security agencies and voters can bear witness to the fact that the electoral umpire announced the result not because my opponent had scored the majority of lawful votes. I am sure those of them saddled with the responsibility of ensuring a free and fair election but aided and abated this grave injustice against our people will be eternally trailed by the guilt of their conscience and await the ultimate judgement of God,” Kofa declared.
He added that, “I have therefore accepted the outcome of the elections and wish to congratulate my opponent Aliyu Datti Ahmed who will continue from where I started about a decade ago and has now come to an end.
“I look forward to working closely with him and giving him whatever cooperation and assistance to settle down in his new role of representing our people. I do not intend to file petition against his declaration as winner. It is time to move on.”
He also promised to continue to support the APC, “I will continue to support the progress and development of my party, the APC both at the national and state levels and my constituency and constituents in my personal capacity as I have always done before I became an elected Representative nine years ago,” Kofa however said.
Top Stories