The Vice-Chancellor of MOUAU, Umudike (MOUAU) in Abia State, Professor Francis Otunta has been accused of sexually harassing staff. 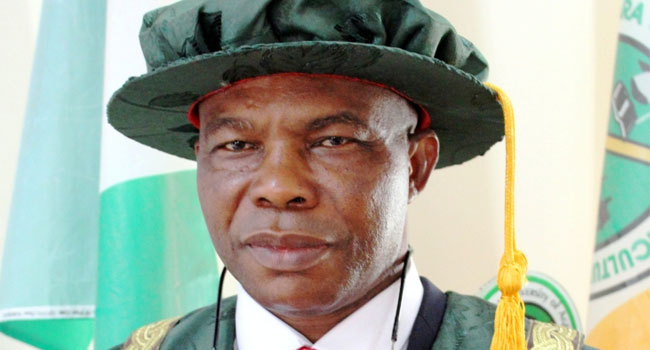 Vice-Chancellor Professor Otunta
The Management of Michael Okpara University Of Agriculture, Umudike (MOUAU) in Abia State, has reacted after the Vice-Chancellor of the university, Professor Francis Otunta was accused of sexual harassment.
The school management said the VC is not guilty of the charges, according to a report by Channels Television.
A female staff, Doctor Patricia Mbah had accused the VC of harrassing her sexually.
However, the management said she was disciplined for travelling abroad and absconding from her duties without due authorization.
In a statement by the Registrar and Secretary to Council, Mrs. Jacinta Ogwo-Agu, the school authorities described the allegation as a product of frustration and vendetta.
Ogwo-Agu said investigations revealed that Professor Otunta “at no time or place harassed physically or sexually Doctor Patricia Mbah as he has no need to do so.”
The university insists that the Vice-Chancellor is ever ready to defend his innocence before any lawful and properly constituted body set up to investigate the allegation.
The school’s reaction comes three months after senior lecturer at the University of Lagos, Akoka, Dr. Boniface Igbeneghu, was caught on tape making amorous advances at a ‘student’ seeking admission into the school.
Igbeneghu, who teaches in the Faculty of Arts, was caught after a reporter with the British Broadcasting Corporation posed as a prospective student of UNILAG.
The reporter had sought the help of the lecturer to gain admission.
Top Stories