A muslim group has kicked against the formation of operation 'Amotekun' alleging it is an agenda for Christians to dominate southwest. 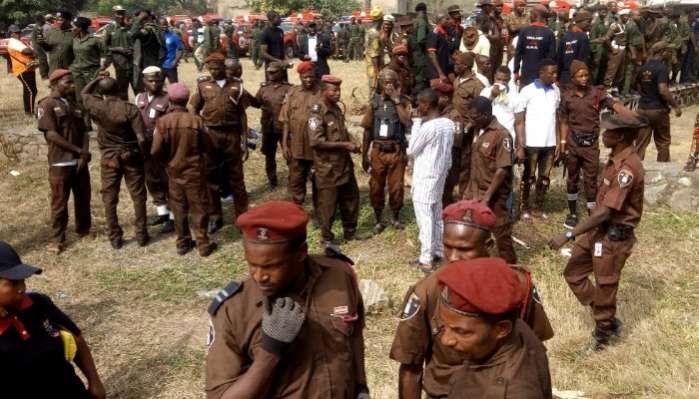 Amotekun recruitment
The Supreme Council for Sharia in Nigeria has revealed its displeasure for the formation of the Western Nigeria Security Outfit tagged “Operation Amotekun” describing it as a subtle effort to Christianise the region.
The group had during a press conference addressed by its Vice President, Sheikh Abdur’rasheed Hadiyatullah at the Correspondents’ chapel in Osogbo on Monday said Amotekun is a covert effort to create a Christian dominated state police.
According to the Hadiyatullah, Amotekun have a sinister motive which is at variance with true, genuine and real yawning of the public for a more secure environment.
“The Amotekun program is viewed as a subtle method of further Christianization of the Southwest by its promoters in their usual manner of having political and power dominance over the Muslims in the region.
“It is another elusive way of establishing a ‘Christian-dominated State Police Force whose alfairs would be designed and determined from the Church at the expense of the Muslims majority in the region”.
The group demanded that “Provision of effective safety for lives and property of the people at any point in time is a collective responsibility one that is devoid of any iota of elements of religious, ethnic and primitive bigotry; a type of garment that Amotekun presently but unfortunately wears”.
“Issues of security of the peoples ought not to be premised on the altar of politics and personal interests as doing such would amount to building an empire on mere propaganda and the figment of the imagination of the gullible. It stands to collapse shortly after its creation.
“Any form of the Christian agenda camouflaged as a Security Outfit, such as the Amotekun, where the Muslims population from the Southwest and in the country at large is viewed as a target is an act of injustice, unfairness, inequality, barbarism, savagery and wickedness taken too far and therefore outright unacceptable and thereby condemned in its entirety”.
However, Omipidan said the group is not aware of the details of the outfit but based its criticism on information gathered on social media.
He said there is no recruitment for the outfit being done on the basis of religious affiliation, adding that there was never a time the Christian Association of Nigeria (CAN) was involved in the formation of the outfit.
“If you sit down with those peddling the misinformation they probably do not understand the basis of the argument they are making. Apart from the social media misinformation that Amotekun was coined from the Bible.
There was no time the Christian Association of Nigeria was part of the meeting when most of these decisions were taken. And if CAN has never been part of the decision, how will you ascribe it to a particular religion? I think it is important to make that clarification that there is no recruitment based on church birth certificate”, he added.
Top Stories