The Gunners already have problems in defence with Calum Chambers, Kieran Tierney and Sead Kolasinac all out injured. 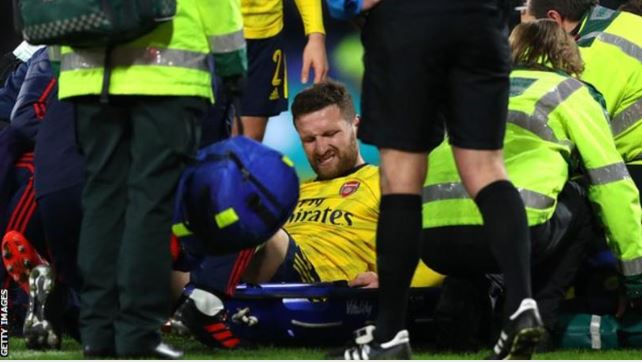 Arsenal manager Mikel Arteta says Shkodran Mustafi will have a scan after he was taken off on a stretcher in their FA Cup fourth-round win at Bournemouth.

The German defender landed awkwardly on his ankle after a collision with Gunners goalkeeper Emiliano Martinez.

"I hope I'm wrong but when a central defender is taken off on a stretcher it is not usually good," Arteta said.

"We will find out more in the next days and we will assess it."

The Gunners already have problems in defence with Calum Chambers, Kieran Tierney and Sead Kolasinac all out injured.

Brazil defender David Luiz was also absent from their win on the south coast through suspension but will be available for their trip to Burnley in the Premier League on Sunday.

Mustafi, 27, has started Arsenal's past three matches. He was replaced by Rob Holding in an area of the pitch that Arteta has already determined needs reinforcement.

Arsenal have been in talks over a £10m deal for 26-year-old Flamengo defender Pablo Mari but the move has currently stalled.

Arteta added: "We are very clear in what we want to do in the market with the resources we have, so we will see what happens."

The Spaniard however, was more forthcoming over reports linking forward Pierre-Emerick Aubameyang with a move to Barcelona in the January transfer window.

The Gabon forward, 30, who was serving the last game of his suspension after being sent off against Crystal Palace, is currently the Gunners' top scorer with 16 goals.

"I want Auba here 100%," Arteta said. "I'm so happy with him and I can't wait to have him available again after suspension."