The police officers arrested no fewer than 100 workers and patrons of the centres after the operation. 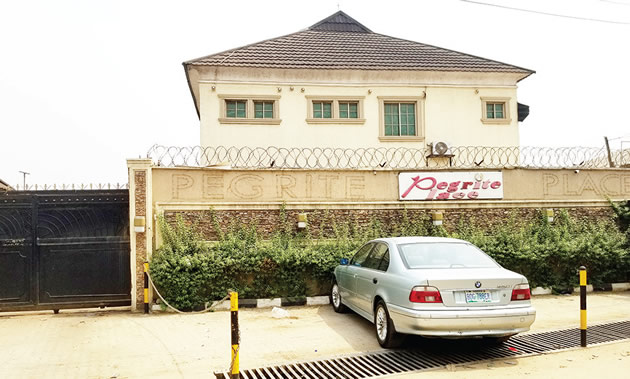 One of the hotels

According to a report by Punch Metro, pandemonium broke out on Tuesday in the Ebute area of Ikorodu, Lagos State, when the Divisional Police Officer, Ipakodo, Shedrack Oriloye, allegedly led his men to raid some hotels in the area.

The policemen arrested no fewer than 100 workers and patrons of the centres.

When PUNCH Metro visited the Club Lakers and the Pegrite Place in the Ebute area on Wednesday, it was gathered that Oriloye and his men, who were accompanied by some personnel of the Special Anti-Robbery Squad, invaded the lounges between 8pm and 10pm, and threw the workers and customers into panic.

During the invasion, business activities were paralysed and the CCTV footage from the Club Lakers showed policemen marching the workers and customers into private and commercial vehicles, for transfer to the Ipakodo Police Station.

The manager of the lounge, Bekkidita Toyo, while condemning the raid, alleged that she was assaulted, adding that some of the policemen were armed, while others wore masks to conceal their identities.

She said, “I wanted to get fish for a customer when I saw the policemen engaging our mobile police officers, who were stationed at the gate. The DPO was also there and claimed that their coming was an order from the Commissioner of Police, Hakeem Odumosu. So, they came in and lined up our customers and workers, and marched them into the buses that they brought for the raid.

“Some of the policemen were in uniform, while others dressed casually and two of them used bandana to cover their faces. Over 60 customers and workers were arrested and taken to the station.

“When we got there, a policeman slapped me and held me by my clothes for asking why we were arrested and some of us were put behind the counter, while others were put in the cell till my boss came to bail us around midnight.”

A customer, who identified himself simply as Fatai, said the police took advantage of the raid to extort innocent persons, adding that when they protested their arrest at the station, a policeman fired teargas at them.

He said, “I lodged in the hotel and was having a nice time at the lounge when the raid happened. I was surprised that the police could fire teargas at us at the station, people started coughing and vomiting; a lady even slumped, because she could not breathe again.

“I don’t know why they harassed us for having fun. While we were being driven to the station, some people bribed the policemen and they were freed, but I refused to do so, because I did nothing wrong.”

The hotel’s cashier, Musa Abiodun, who was also arrested said, “Before the raid, our total sales proceeds were N1,700,800, some customers had paid N200,000, but while others were having a nice time, some were on the verge of paying when the incident happened and everywhere was scattered.”

However, the counsel for the company, Femi Martins, who described the action of the police as barbaric, said he had petitioned the relevant authorities to ensure that justice was served.

Martins stated, “The policemen carried out the raid claiming that they were acting on the instructions of the Commissioner of Police to raid hotels, pubs and nightclubs that operate after 7pm.

“That is impossible because these are licensed outfits. The raid was an action premeditated to extort people; the policemen even tear-gassed the victims in the station and that is irresponsible policing.

“Citizens have rights as enshrined in the Constitution. What was be the DPO’s reason for illegally arresting innocent people, taking them to the station, tear-gassing them and afterwards, releasing them? We want the concerned authorities to investigate this case so that justice can be served.”

The senior security officer at the Pegrite Place, Babatunde Yusuf, said two customers, including a pregnant woman, were hospitalised after the alleged assault on them by the policemen, adding that they were released on bail around 1am.

When contacted, the state Police Public Relations Officer, Bala Elkana, said, “We have ‘On’ and ‘Off’ licences for those operating those kinds of places; these licences regulate their activities. So, once there is a situation in a place, we are at liberty to enforce the provision of that law, because there is a closing hour under the law that gives them the licence to operate.

“But the enforcement does not include harassment of people and infringing on their rights; the directive giving by the Commissioner of Police is clear; they should operate within the rules of engagement.

“The targets were mostly the cultists attacking and killing themselves in Ikorodu, but when the CP got complaints that some people, who were customers of those places, were picked, he ordered their release and they were immediately released.”