He was reacting to the recent call by the national assembly on president Buhari to sack his Service Chiefs over the security situation in the country. 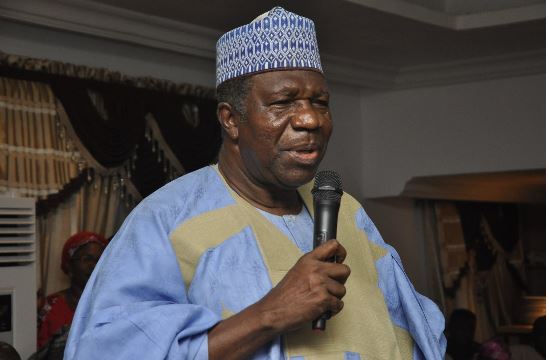 Elder statesman and former President of the Senate, Senator Ameh Ebute, has called on Senate President, Ahmed Lawan, to engage other politicians, technocrats as well as businessmen from the Northeast to help in complementing roles that will solve the lingering security crises in the region.

Ebute wants the Senate President as the most senior political appointee from the Northeast zone to convoke and lead the Northeast reconciliation and peace to end Boko Haram/ISWAP terrorism bedeviling the area.

The ex-legislator decried a situation where everyone including some politicians who are responsible for the crisis blame President Buhari or the patriotic Service Chiefs for the problem instead of playing their roles with a view to ending it.

He was reacting to the recent call by the national assembly on president Buhari to sack his Service Chiefs over the security situation in the country.

Ebute, a former Benue South lawmaker, made the call in the letter addressed to Senator Lawan on Wednesday, a copy of which was made available to DAILY POST.

He advised all hands to be on deck as the fight against insurgency should not be left for the Service Chiefs or Mr. President alone.

The letter added, “It is time for you to convoke and lead the Northeast reconciliation and peace to end Boko Haram/ISWAP terrorism: Open letter.

“May I especially extend compliments of the season to you and members of the Ninth National Assembly. I commend your leadership of the national parliament which is functioning on a seamless template with the executive arm of government for the development and prosperity of the country.

“I need no introduction either to you or Nigerians, having earlier served my country in your present capacity. As an elder statesman, I intermittently comment on national affairs from the sidelines and offer advice where necessary, which I won’t hesitate to indulge now.

“At the turn of the Year 2020, I felt a pulsating urge to write an open epistle to you on the Boko Haram insurgency and Islamic State West Africa (ISWAP) terrorism ravaging Nigeria’s Northeast particularly, a region of your ancestry. It is also home to many other prominent personalities who served or are currently holding influential positions in Nigeria.

“Boko Haram/ISWAP terrorism in Nigeria has cloaked 10 years plus and still counting in atrocious acts. We thank God for the emergence of President Muhammadu Buhari as our democratic leader in 2015 and the deafening commitment of his administration, which has decimated and technically defeated terrorists in Nigeria. Under his administration, many communities and LGAs in the Northeast which were in the hands of Boko Haram terrorists have been reclaimed.

“Without the hard and sustained mitigation of the Buhari Presidency, Boko Haram and ISWAP terrorism would have overwhelmed and conquered Nigeria by now. The Nigerian military, especially, the Nigerian Army, led by the COAS and leader of the counter-insurgency operations, Lt.Gen. TY Buratai have exhibited tremendous courage and gallantry in the confrontations and repression of terrorists. They deserve our eulogies every day.

“But as known to all of us, Boko Haram insurgency is yet to be blighted completely in our land. The repressed and feeble Boko Haram has been enlivened and energized by the more vicious ISWAP terrorists from Iran. It is overstretching the Nigerian military. But they have found strength because of the receptiveness of local accomplices to their evil.

“It is obvious that military solutions alone, as we seem to focus now cannot quench the fire of terrorism in the Northeast. There is every need to also apply political and economic solutions to Boko Haram/ISWAP terrorism. It is a problem that should be tackled on all fronts simultaneously.

“We cannot dodge the reality that youths in these areas have not felt the impact of government these years. It is the reason for their restlessness and why they are easily lured as willing tools in the hands of the Boko Haram insurgents to engage in mischief and evil against their own country.

“This is where I find you and your office as the Number three citizen of Nigeria now relevant and sensitive. You have over delayed acting by convoking a parley among all political leaders and business moguls of the Northeast to deliberate and come out with political and economic remedies to end terrorism.

“Sir, you are the most senior political leader from the entire Northeast and there is every need for you to act or demonstrate concern and real leadership of your people. You should be worried and sleepless over the ruination and devastation of your land of birth by bile and brutal campaigns of terrorists, imported into Nigeria and supported by indigenous non-state actors who are undeniably extending covert support for festering Boko Haram/ISWAP terrorism in Nigeria.

“It is time you dust your leadership focus on legislations/approval of budgets for terrorism expenditures alone. It behooves on you to galvanize the forces in the Northeast towards finding durable political and economic solutions to terrorism in the region.

“Your inability to summon a Northeast stakeholders, political appointees, businessmen and women and all the intellectuals parley from the region to find a lasting solution speaks more about indifference to the plight of your people.

“Besides, we have ministers from each of these states; National Assembly members, States Assembly members, traditional and religious leaders and prominent multi-billionaires from the Northeast region. The list is by no means exhaustive. Why have you not deemed it necessary to lead a dialogue with these personalities to chat a course to make Boko Haram/ ISWAP terrorism ravaging the Northeast become history?

“Let us not be deceived, if these respected leaders and personalities cannot do it, no one else can do it. And leaving the entire burden in the hands of President Buhari and the Nigerian military alone is not a thoughtful or wise decision and can never end terrorism.

“Nigerians would like to see a new commitment from the Senate President and other leaders from the region in doing more to achieve the needed results. Fortunately, Borno state Governor Babagana Zulum has shown enough zeal in this direction and you must pair with him to find the needed solutions to end Boko Haram/ ISWAP terrorism.

“Peace and security, which every nation craves to enjoy is not a commodity that can be achieved in a day; just like war is not won in one day. Whilst the military can subdue and neutralize the threats posed by the insurgents, the ultimate foundation to peace lies in the hands of stakeholders from this region who are expected to navigate unconventional means to engage the youths and the people generally.

“Therefore, leaving the battle to Mr. President and the military chiefs alone can only bring an end to the bombings, but not a final end to the killings which are usually perpetrated by neglected and abandoned youths who are hired by terrorist kingpins.

“The Senate in particular and the National Assembly as a whole can actually do quite a lot more to support Mr. President win these anti-terrorism campaigns. You were a member of the eighth Senate which refused to grant approval for Mr. President to secure funds for arms and ammunition to fight terrorism. There is no doubt that the Senate under your leadership has been helpful to Mr. President and it is expected to do more to support him.

“And as individual leaders at our personal levels, there is much we can to economically to empower unemployed youths in the region to divert their attention from evil acts of terrorists. For instance, if each member of the national assembly decides to employ 20 youths as a community development project, we would be putting a reasonable number of youths out of the reach of Boko Haram terrorist masters for engagement.

“The national parliamentarians from the region could channel constituency funds to productive use to uplift the economic status of people in the region by establishing cottage industries or invest in other small-scale economic ventures.

“Let me pause now. But I expect you to reflect deeply on these proposals and act accordingly to erase the tears of your people in the Northeast.”