A leading member of the Peoples Democratic Party in Lagos state has cautioned the ruling APC following the recent okada and tricycle. 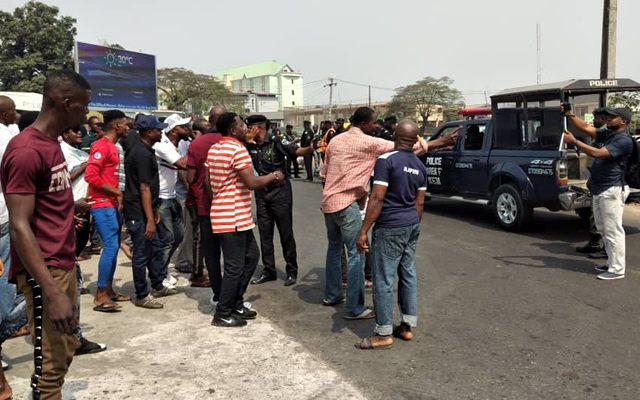 Lagosians protesting okada and tricycle ban
Jimi Agbaje, a chieftain of the Peoples Democratic Party (PDP) on Monday condemned the outright ban on okada and tricycles in some parts of Lagos state.
He said the ban is not the solution to accidents and insecurity which is the primary concern of the state government.
Speaking in a chat with Daily Independent, Agbaje who was the Lagos state governorship candidate of the PDP in the 2015 and 2019 general elections said the ban which took effect from February 1 has kept thousands of okada and tricycle riders out jobs .
He said this will have a ripple effect on the economy as those associated with them such as the vulcanizers, spare parts sellers, food sellers and others will also be negatively affected.
While noting the hardships being experienced by some Lagosians as a result of the ban, Agbaje advised Governor Babajide Sanwo-Olu to regulate the activities of the operators instead of the outright ban, adding that jobless okada and tricycle riders may resort to crimes which will not augur well for the security of the state.
“For me, I note the concerns of the Lagos State Government on security and accidents. But having said that, I am not sure the solution to these problems is the outright ban on the routes they have listed. When you look at the effect of the ban, you are putting thousands of people out of jobs”.
“There is also a ripple effect of the ban because the vulcanizers who mend the tyres of these tricycles and okada will have no jobs to do. Also, the food seller who sells to these okada riders will also close business as they can no longer patronize her”.
“So, it has a ripple effect and to that extent, it affects the economy. It brings about its own security issues. A jobless tricycle or okada rider can be dangerous”.
“I think what we need to do is to regulate them. Regulating them is to bring about the formal operators. You have people that have put together a set up, all you need do is to regulate them”.
“Those operators have regulated themselves in the sense that they have bought motorcycles that are within the laws of Lagos state by the capacity of their motorcycles, so by law they are allowed to move on any route”, he said.
Top Stories