The clash between the police and okada riders over the recent ban of their activities by the Lagos state government has reportedly left three persons dead. 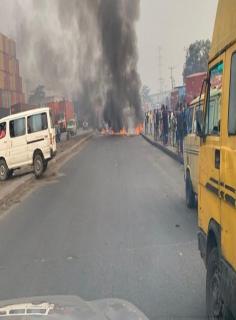 Scene of the incident where Okada riders and police clashed in Lagos
Three persons have been feared killed after a fight broke out between commercial motorcyclists and Policemen at Ijora in Apapa, Lagos.
This is coming after a fight started around 9:30am as a result of ban placed on okada and tricycles in Lagos.
The incident led to destruction of vehicles and other properties in the area.
It was gathered that hell was let loose after policemen had gone to the port community to enforce the State Government's ban on commercial cycles but met stiff resistance from the operators who had earlier vowed to unleash Mayhem in protest against the new order.
At the time of this report, security has been reinforced and several motorcycles seized.
Top Stories