A senior advocate has thrown his support for senator Enyinnaya Abaribe reiterating that the lawmaker spoke the minds of Nigerians. 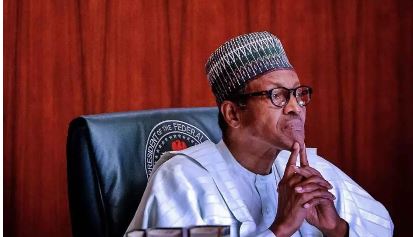 President Muhammadu Buhari
Following mixed reactions over the call by the minority leader of the Senate, Hon Enyinnaya Abaribe that President Mohammadu Buhari should resign for his failure to tackle insecurity, a Senior Advocate of Nigeria has given him thumbs up for the brave act.
Speaking with DAILY POST in Calabar, the Cross River State capital, a Senior Advocate of Nigeria (SAN) Ntufam Mba Ukweni lamented the deplorable security situation, saying that it has never been this bad in the country.
He said even though, Abaribe spoke his mind, he spoke the minds of Nigerians, the minds of the people he is representing as well as the minds of the people in the South East.
“Minority Leader in the Senate, (Abaribe) was not too hard on the President. You know that we are in a country where we celebrate incompetence, ethnicity and other primordial sentiments. These things have overcrowded our sense of fairness.
“If the President came to power and said, ‘I am coming to take charge of the security situation’ and we are in his second term, nothing has been done, the security situation has become worse, he has no reason to continue as President, there is no reason why he should continue as President.
“He appointed Service Chiefs and right before him, money was stolen, the money meant for security, exactly the same thing they were accusing the other administration. That was what they were accusing the other administration, so people should look at it deeply and don’t look at any sentiment”
The Senior Advocate of Nigeria asked, “Has the President performed in respect of security? Ifhe has not performed, he has a duty to the country. He has a duty to the people, the electorate who elected him, to account for them and in a democracy, if you don’t do well, there is nothing wrong in the people asking you to quit. These people are our elected representatives, they are the voice of the people.
“Abaribe has expressed himself. He has the right to express himself, There is nothing wrong in calling on the President and said Mr President, you have failed us in every respect, you have failed us in this particular respect, you can honourably resign. He has his right to say so.”
On the forming of security outfits by the South East people, the SAN regretted that the South East has taken too long a time in doing that. According to him, they should have been the first people who would have done that. Every unit, every state, every local government; every community has a duty to protect itself. so I am in complete agreement with the fact that every State and every region should take steps to see to it that, they protect their citizens in their own States and region, up to communities.
On the call for service chiefs to be replaced, Ntufam maintained that the Service Chiefs have not performed well, they have failed us, in fact, left for me, I would believe that they have actually compromised the system.
“That is my own conviction, because Abacha said something like this and I believe it is true. He said that any insurrection that lasts for more than 24 hours, the government is interested, the government has a hand in it, so for Boko Haram and the insecurity situation to continue for this long a time, it should be our belief that the government has a hand in it and since they have a hand in it, they should leave the system so that people who would be independent enough can come and secure our people,” he stated.
Also speaking, a senior member of the Bar, Chief Barrister Fidelix Onyebueke said, “The man has spoken his mind and also spoken the minds of the majority of the people, particularly his party faithful, PDP and also spoken the minds of the people he represents in the South East.
“The security situation in Nigeria is too bad and very horrifying, We have never had it so bad in Nigeria before now. I was an ardent supporter of Buhari when he was the Head of State in 1983, you know how he performed, his role in discipline and corruption, hopefully in 2015, we supported him and he did his best but in 2019 none of his promises were working.
“But Abaribe has his views and has his reasons for calling for his resignation, and I hope that the senate is handling the matter. They said the Service Chiefs should be relieved of their duties, otherwise the country is in a terrible situation as far as security is concerned. Im personally not happy about the security situation at all.
“I am not satisfied with the security situation, I am not at all. The President is a human being, he is doing his best but the best is not enough. I don’t think his advisers are advising him very well.
“I can’t see why security situation would be so bad in Nigeria that soldiers, and policemen cannot handle. I don’t know but I know when police want to work they perform, but this issue of killing here and there, see what happened in Plateau, see what happened in other states, does it means Boko Haram cannot be wiped out. I don’t think Sambisa forest is so wide that they cannot locate them. I don’t know; I am confused.
“But it is unfortunate that this is happening now but we hope Mr President will take up the challenge. He should not resign because it will create confusion in the country. The only thing is that he should be advised adequately to perform by changing guards. Let’s have fresh service chiefs” he said.
Top Stories