Kaduna Winners Chapel Bomb Suspect Told Us His Name Was Mohammed, Not Samuel - CAN


The controversy surrounding the identity of the suspected suicide bomber arrested at Kaduna Winners chapel has continued with CAN insisting he's not a Christian. 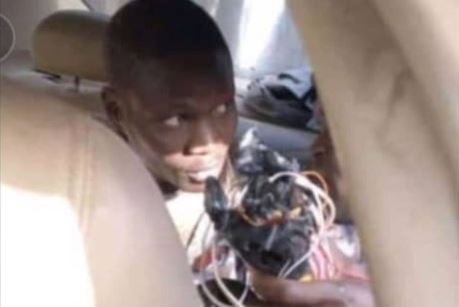 Kaduna bomber caught at Winners Chapel
The Chairman of the Christian Association of Nigeria in Kaduna State, Rev. John Hayab, has insisted that the bombing suspect arrested while attempting to blow up a Winners’ Chapel Parish in Kaduna State on Sunday identified himself as Mohammed Sani when he was apprehended by the church.
According to Punch, Hayab claimed after the church handed him over to the police, the suspect’s name suddenly changed to Samuel Nathaniel.
He, therefore, said there was a need for the matter to be thoroughly investigated.
The CAN chairman said this during an interview with The PUNCH on Monday.
The cleric said, “The church was in session when the young man came in, dropped his bag and exited as if he was going to the toilet, but didn’t come back in time. Some church members became suspicious. The church had put security measures in place such that they monitor everything going on in the church and they even have CCTV cameras.
“They discovered that what was in the bag looked like explosives, so they called the police. Let me state clearly that it was not the police that arrested him. It was the church that arrested him and then handed him over to the police.
“The police came to pick him up at the church. At the time he was interrogated at the church, he told the church that his name was Mohammed Sani, but when he was handed over to the police, the police told everyone that his name was Samuel Nathaniel.”
Hayab said the mix-up in the name of the suspect had further given credence to the claims by the United States that Nigeria remained a terrorist-prone country because of a lack of database.
He said the religion which the suspect practises should not be the focus of public discussions but the act of terrorism.
The cleric said the police had failed to effectively investigate and profile suspects, adding that a few weeks ago, the force also arrested a hoodlum and erroneously paraded him as a pastor.
The CAN chief said, “This incident justifies the US’ decision to place visa restrictions on Nigerians. The US Government told us that one of the reasons for the visa ban was that Nigeria do not do proper background checks on people.
“So, a criminal can go to one part of Kaduna and bear John, travel to another part of the state and bear Abdullahi or Oluwole or Emeka and nobody will know. So, let us stop focusing on his name but his crime. A criminal is a criminal.
“There are now two versions, one from the church and one from the police.
“I don’t care what his name is. All I know is that a criminal wanted to blow up a church and kill people. The police should find out who his sponsors are and not play politics with names. Last week, a man was paraded by the police for faking his kidnap and identified as a pastor, only for us to find out he was never a pastor.”
Hayab said there were Christians bearing Muslim names and vice versa.
“I know Muslims that bear Paul, I know Christians that bear Mohammed. Our CAN chairman in Borno State is Mohammed Laga. I have a cousin that bears Mohammed Paul. So, let us not focus on the name but on the act of terrorism,” he said.
Hayab said it was curious that the attempted bombing took place at the same time CAN’s rally against terrorism was taking place.
He said the church would not be intimidated by anyone.
Top Stories