Following the recent Okada ban, there has been a clash between the police and Okada riders at Iyana-Ipaja 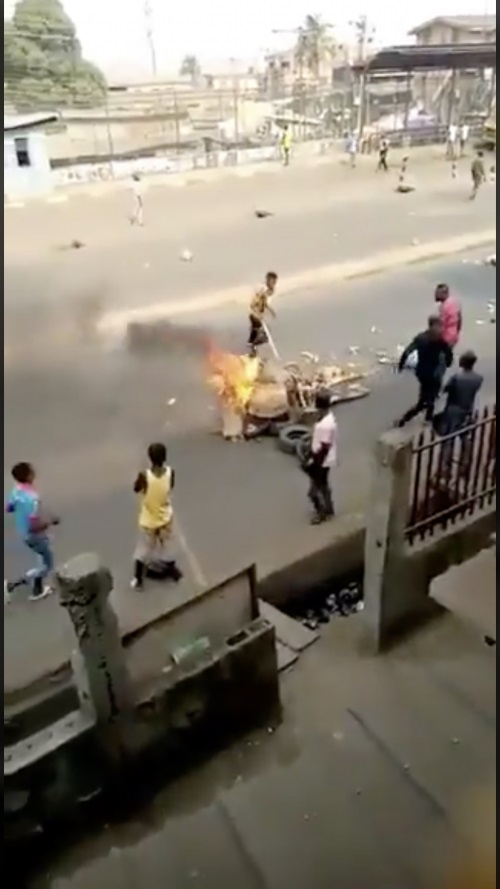 Hell was let loose in the early hours of Wednesday, in Iyana-Ipaja area of the state when dealers of motorcycles, popularly called “Okada,” riders and miscreants, known as “Area Boys,” engaged the police in a violent confrontation over enforcement of the recent ban by state government on Okada and others.

The situation which led to commotion and destruction of properties was said to have started around 8.am, which also resulted into traffic jam as motorists were caught in the clash.

Several vehicles were smashed and shops looted by miscreants who seized the opportunity to loot and vandalized properties.

According to eyewitness, identified as Mr Gbenga Alawaye, the trouble started when the police allegedly went into various shops where motorcycles are being sold and attempted to impound them.

The dealers, apparently, felt they have not committed any offence, resisted the police from removing the items and in the process led into chaos as miscreants joined in the confrontation that ensued.

The entire area was blocked as protesters set bon-fire on the road, thus, preventing vehicular movement.

The police, attached to the state taskforce, following the violent attack and being overwhelmed by the surging miscreants, called for reinforcement.

Men of the Rapid Response Squad, RRS, who provided reinforcement, on arrival at the scene shot cannisters of teargas into the air to scare away the miscreants.

The situation was later brought under control at about 11 am when police restored law and order to the area.

A RRS source, who preferred anonymity, said a total number of 21 suspects have been arrested in connection with the attack and taken to Area “M” Police Command, Idimu.

The source, however, dismissed report making the round that a police van was set ablaze in the process, saying, “No police van has been set ablaze. Its not true.”

One of the riders who spoke to Vanguard accused the police of seizing the ban to exploit “Okada” riders and dealers, especially, in the areas not affected by the ban.

“The state government and Commissioner of Police should call the taskforce and other enforcement agents to order as they are using the ban to extort money from innocent riders and dealers in the areas not affected by the ban.

“The police authorities should create a monitoring squad that will check the excesses of their men while enforcing the ban. This is not fair to us. They want us to take to robbery or criminal acts. Because they have taken away our means of livelihood. Help us beg them.” ( appealing to this correspondent).

Recall that the state government had on February 1st commenced total enforcement of Reform Traffic Law of 2018 banning the activities of the Okada and tricycle, called “Keke NAPEP, ” operators on restricted routes and bridges across 15 Local Government Areas of the state, which excluded Iyana-Ipaja.