Men of the Nigeria police have killed at least 250 terrorists who attacked a military chopper in Kaduna. 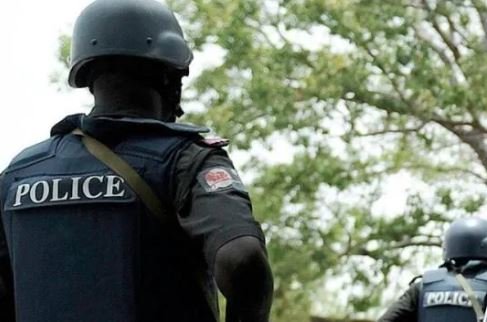 Police
The police on Wednesday said it killed at least 250 bandits terrorizing people of Kaduna state inside Kaduna forest.
The onslaught was led by Special Operatives of Operation Puff Adder of the police. They were supported by the special forces of the police Air Wing.
The bandits retaliated  by firing shots using sophisticated anti-aircraft riffles and General Purpose Machine Gun (GPMG) at the police helicopter which was providing aerial and intelligence cover to the special forces.
The police said no fewer than 250 bandits and terrorists were killed. The pilot and co-pilot of the helicopter sustained injuries.
But there was no independent confirmation of the casualty figure.
Recounting the battle on Wednesday, Police spokesman Frank Mba, a deputy commissioner, said the daring offensive operation successfully neutralised over 250 high-profile members of the Ansaru Terror Group.
He added: “The operation which commenced in the early hours of today, 5th February, 2020, was carried out by a combined team of operatives of Operation Puff Adder made up of the Police Mobile Force (PMF), Counter Terrorism Unit (CTU), Special Forces, Intelligence Response Team (IRT), Special Tactical Squad (STS) and Special Anti-Robbery Squad (SARS). The operation was necessitated by actionable intelligence linking terror and criminal elements in the super camp to series of terror-related violence, kidnappings, gun-running, cattle rustling and other heinous crimes across the country.
”Unfortunately, during the operation, a Police Bell helicopter, which provided aerial and intelligence cover for the ground troops, came under attack from the bandits, using sophisticated anti-aircraft rifles and GPMG. Commendably, the pilot and the co-pilot, who demonstrated uncommon courage and expertise, successfully landed the aircraft at the Air Force Base, Kaduna without further incident.
“They were thereafter evacuated for medical treatment. Both officers who sustained non-life threatening injuries are currently receiving treatment and are in stable condition.
The Police helicopter has since been flown out of the Kaduna Air Force Base by Police Pilots en-route to Abuja.
”The Inspector General of Police assures citizens of safety and sustained intelligence-led operations against bandits across the length and breadth of the nation. He has equally applauded the unparalleled bravery, commitment and dedication of the Police operatives currently conducting the special mission,” the statement read.
Also on Wednesday, on another front, the Nigerian Air Force (NAF), through the Air Task Force (ATF) of Operation Lafiya Dole, launched Operation Rattle Snake Iii against terrorists’ elements in the Northeast, NAF Director of Public Relations and Information Air Commodore Ibikunle Daramola, said yesterday.
The spokesman said the Air Interdiction Operation, which commenced on Tuesday, would target selected locations within the Northeast to further degrade the remnants of the terrorists as well as deny them freedom of action.
He explained: “On Day One of the Operation, air strikes by NAF attack aircraft resulted in the destruction of an Islamic State of West Africa Province (ISWAP) hideout as well as the neutralisation of some of their fighters at Tongule in the Lake Chad area of Northern Borno.
“ The air strikes were executed following series of Intelligence, Surveillance and Reconnaissance (ISR) missions, indicating that ISWAP fighters were harboured in some buildings at the southern edge of the settlement.
“Accordingly, the ATF dispatched its fighter jets to engage the location, scoring accurate hits on the designated target leading to the destruction of the structures and the neutralisation of some of the terrorists,” he said.
He said the Air Force, operating in concert with surface forces, would sustain its air campaign to shape the battle space in the North East for the effective conduct of further ground and air operations.
Top Stories