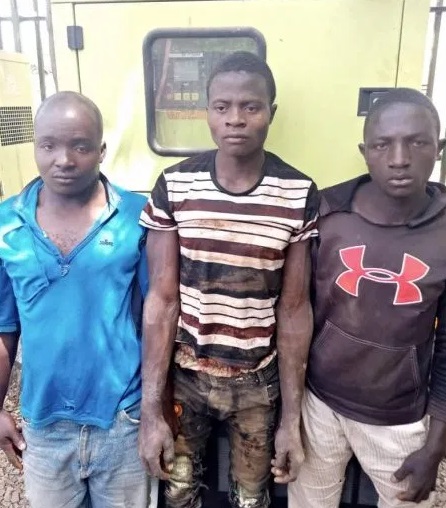 The three ansaru terrorists arrested by the police
The Nigerian Police in Kaduna State have arrested three members of Ansaru Terror Group in the ongoing mop up operation in Kuduru Forest.
The arrested suspects were identified as Munkailu Liman Isah a.k.a Babban Driver’m’ 32yrs, Abdullahi Saminu a.k.a Danmunafiki ‘m’ 21yrs and Aminu Usman.
The Kaduna Police Command said the arrested Ansaru members are already helping out with information relating to the group's membership, criminal/operational records, logistics and general modus operandi.
Read the statement below:
“Preliminary investigation reveals that the arrested suspects were actively involved in the recent attack and attempted kidnap of the Emir of Potiskum that resulted in the gruesome killing of the Emir’s Police escorts.
They were also involved in several other kidnap operations and terror attacks on commuters and other innocent citizens along some major highways, especially in the North-West and North Central States of the country.
“Unfortunately, investigation also reveals that some citizens, especially those within the business community, give tacit support to the terror groups by deliberately doing businesses with them through the supply of essential goods, drugs (licit/illicit) and other services. To this end, the IGP calls for patriotism amongst the people, noting that this is the only way the fight against the criminal elements can truly be won”.
Top Stories