A presidential spokesperson, Femi Adesina has reacted following a vote of no confidence passed on Buhari by northern elders. 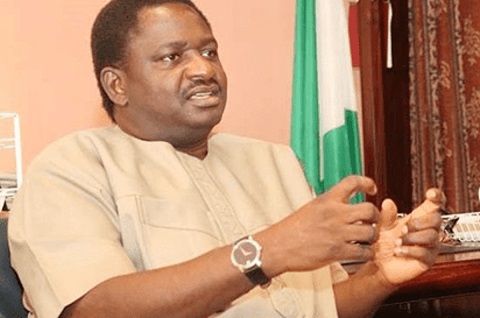 Femi Adesina
The Presidency has reacted to the verdict passed on President Muhammadu Buhari by Northern Elders Forum.
Recall that the Forum said Buhari has failed Nigerians.
Reacting, the presidency said the forum lacked credibility.
The Presidency said NEF was at best a one-man squad led by its Chairman, Prof Ango Abdullahi, describing NEF as the case of an army General without troops.
A State House statement by presidential media aide, Mr Femi Adesina, said NEF was all about Abdullahi and had no other credible names of worth.
The Presidency stated, “Prof. Ango Abdullahi on Sunday signed a long-winding statement on many issues relating to the North, and purportedly to the country.
“The former Vice-Chancellor signed the statement under the banner of Northern Elders Forum. Hearing that title, you would think the body was a conglomeration of true elders.
“But the truth is that NEF is just Ango Abdullahi, and Ango Abdullahi is NEF. It is a quasi-organisation that boasts of no credible membership, and its leader is akin to a General without troops.”
The Presidency recalled how ahead of the 2019 presidential poll, the NEF allegedly opposed Buhari’s bid to seek a second term by backing another candidate.
However, it said the preferred NEF candidate lost.
“NEF is merely waving a flag that is at half-mast. President Buhari steadily and steadfastly focuses on the task of retooling Nigeria, and discerning Nigerians know the true state of the nation.
“They don’t need a paper tiger to tell them anything.”
Top Stories