Passengers were left praying to God for help after a plane from Nigeria struggled to land at Heathrow airport, UK. 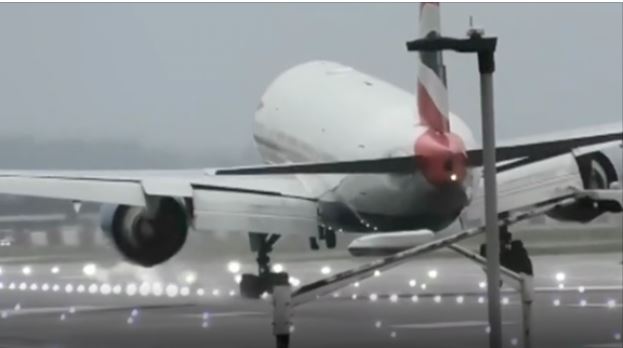 The plane struggled to land at Heathrow airport
An airplane struggled to land at Heathrow Airport in the United Kingdom on Sunday following strong wind, leaving passengers in a state of fear.
According to BBC, British Airways was unable to confirm the source of the flight, although it was reported as coming from Abuja, Nigeria’s capital.
In a Facebook post, one Charles Okonkwo said he was aboard the aircraft from Abuja.
“By far the scariest moment of my life… But The Grace of God was with us. I was in this plane coming back from Abuja this afternoon,” he described his experience in the post.
A video of the incident, which has since gone viral, showed a British Airways plane struggling to land during Storm Ciara.
Storm Ciara had hit the UK with heavy rain and gales of 60mph to 80mph causing more than 100 flights to and fro the country to be cancelled. Streets and buildings were flooded while train and ferry rides were also cancelled.
Some areas were said to have experienced a month-and-a-half’s worth of rainfall and gusts of 97mph which resulted in power cuts for more than half a million households.
The UK government flood warning service also issued a severe warning, indicating “danger to life,” after the River Irwell in northwest England flooded its banks.
See below a video of the incident involving the aircraft:
Top Stories