A woman has caused a stir in a Lagos community after storming her ex-boyfriend's house and destroying his car. 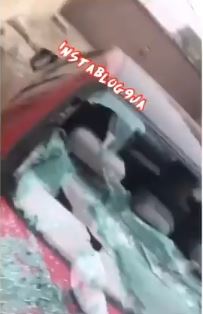 In what will come across as a really shocking development, a scorned woman has attacked her ex-boyfriend.

Local reports show that the woman identified as Clara stormed her ex-boyfriend's home in Ajah, Lagos state and destroyed the new car he just bought for himself.

Witnesses claimed that while breaking the windscreens, she kept shouting "Happy valentine".

The pained ex-boyfriend has now made a video showing the destroyed car as he laments the development.

At the moment, its is not clear the steps that the ex-boyfriend has taken to address the matter.