A Lady took to Instagram to accuse a Christ Embassy Pastor Of allegedly assaulting her and her kids after she demanded for payment of the money he owes her. 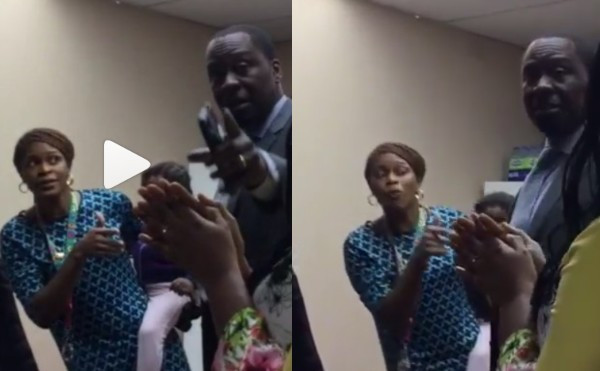 A Nigerian lady took to Instagram to share a video of a confrontation at LoveWorld Church a.k.a Christ Embassy in Lachine, Montreal in Canada, which she claimed led to her and her three children being assaulted.

According to Anita Humphrey, she was allegedly assaulted for demanding for a written agreement for the balance of the money a Pastor of the church, Peter Enone owed her.

The lady claimed Pastor Enone told members of the church to throw her and her children out of the building for making the demands. She wrote;

My name is Anita Humphrey. I and my 3 children were assaulted on Sunday by Pastor Peter Enone of Christ Embassy, Lachine in Montreal, Canada for demanding for the money they owe me.

He ordered members of his church to physically throw us out because I was DEMANDING A WRITTEN AGREEMENT FOR THE 10.9K$ CANADIAN BALANCE OF THE 13K$. 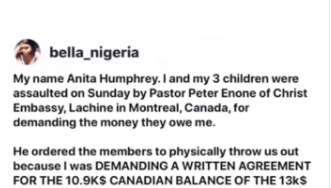 Here are the videos she shared below;

Lady alleges she and her three children were assaulted in a Christ Embassy branch in Montreal, Canada for allegedly demanding for the money a Pastor of the church, Peter Enone owe her