The National Agency for the Prohibition of Trafficking in Persons has arrested two Nigerian and a Lebanese for human Trafficking. 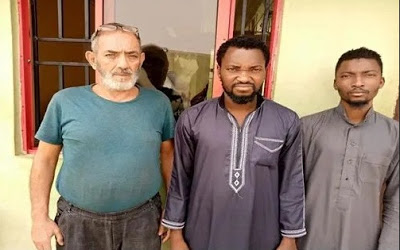 A Lebanese and two Nigerians were on Monday arraigned before a Federal High Court, Ilorin by the National Agency for the Prohibition of Trafficking in Persons, NAPTIP, for alleged trafficking of Nigerian women to Lebanon, for exploitation.

The arraignment of the suspects was a fallout of the investigation into the much-publicized case of Omolola Ajayi, who was trafficked to Lebanon. Ajayi’s video went viral on social media few weeks ago, and she was subsequently rescued and brought back to Nigeria.

The suspects, Mohammed Wafic Hamze, 62, Adetunji Taofeek Sanusi,34 and Tunde Awwal, 27, who were arrainged before has arraigned Justice B. G Ashigar, were slammed with a three- count charge which bothered on Human Trafficking/ Foreign Travel which Promotes Prostitution or other forms of Exploitation in accordance with Section 18 and 27 (a) & (b) of the Trafficking in Persons (Prohibition) Enforcement and Administration Act, 2015.

The case was initially transferred to the Agency by the Kwara State Command of the Nigeria Security and Civil Defence Corps (NSCDC) after which the three suspect were arrested.

According to the Oshogbo Zonal Commander of NAPTIP, Mr. Saadu Mustpha, further investigation revealed that contrary to the initial report, about 16 victims were believed to have been trafficked to the Middle East Countries by the suspects out of which only three have been rescued through the collaboration of Civil Society organization, Nigeria Embassy and other partners.

The three defendants pleaded not guilty to the charges and were subsequently remanded at the custody of the Nigeria Correctional Centre, Ilorin while the case was adjourned to 26th February, 2020 for the commencement of the trial.