Many houses in Chibok area of Borno state have been set on fire by suspected Boko Haram terrorists. 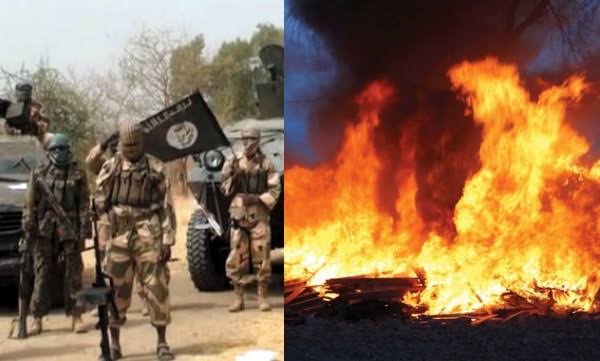 Boko Haram terrorists
Korongilum, a community in Chibok local government area of Borno state has been attacked by suspected Boko Haram insurgents.
According to information from a resident of the area, the insurgents came into the community around 6pm, shooting sporadically and setting many houses on fire.
“People were just returning to their houses from the farm when the insurgents came in,” the resident said.
“They came in through Forfor, and our people are running for safety as we speak.”
TheCable added that a military source said troops from the Nigerian Army’s 28 task force brigade and 117 battalion, both headquartered in Chibok, are already on their way to Korongilum.
“In fact, the brigade and the battalion commanders are the ones leading soldiers to the attack,” the source said.
Top Stories