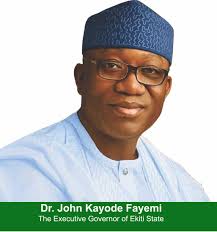 Ekiti State Attorney General and Commissioner for Justice, Wale Fapohunda, said on Wednesday that the state governor, Dr Kayode Fayemi, had approved the translation of laws in Ekiti State into Yoruba Language.

Fapohunda said the laws to be translated included the bill for the establishment of Amotekun Corps and Ekiti State Security Network Agency which was passed into law on Friday by the state House of Assembly and at present awaiting the assent of the governor.

The AG, in a statement in Ado Ekiti, said, “Ekiti State Security Network Agency Bill affects the daily lives of the people of Ekiti State, especially those in our rural communities. It, therefore, follows that this is one legislation that all of our people need to understand.

“In furtherance of the commitment of the Fayemi administration to its citizens’ active participation in governance, Mr Governor has approved the translation of laws of Ekiti State into Yoruba Language.

“Given the volumes of the laws of Ekiti State, the translation will be implemented in phases. The first phase will include laws that have a direct impact on the daily reality of our people,” he said.

On how the laws will be translated, the AG said, “There are many qualified academics in the Ekiti State University, Ado Ekiti who are specialised in Yoruba Language. We will work with them.”

Fapohunda also stated that some of the policy documents of the Ministry of Justice like the Ekiti State Charter for Victims of Crime; Directive on Non-discontinuance of Criminal Matters, Additional Measures in aid of Prosecution of Sexual Violence would also be translated into the Yoruba Language.

Ojo said there had been talks over the years, especially in lawyers’ conferences and meetings, on the need to translate laws into local Nigerian languages, but little progress had been made, adding, “With Ekiti State breaking the ice, it is envisaged that more states will follow.”