At least two Nigerian soldiers are missing and one other's leg blown off after bomb explosion planted by Boko Haram terrorists. 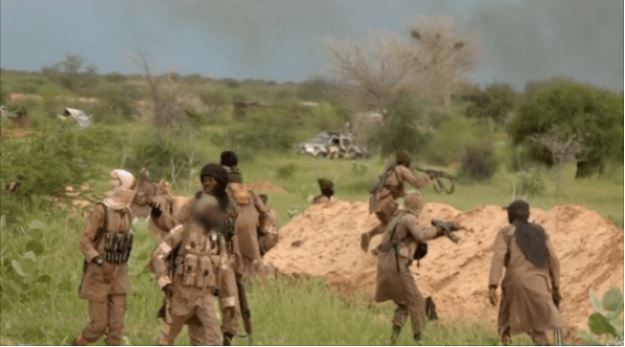 Terrorists
A soldier lost his leg, and two of his colleagues are missing following a fatal attack on their convoy by Boko Haram terrorists.
According to TheCable, the convoy carrying the soldiers ran into an improvised explosive device (IED) planted by suspected Boko Haram insurgents in Korongilum, a community in Chibok local government area of Borno state.
The soldiers were deployed on Wednesday morning as a part of a quick response group (QRG) to respond to an attack in the village.
The insurgents had attacked the community on Tuesday, burning many houses.
Military sources told TheCable on Thursday that the troops from the army’s 117 battalion, headquartered in Chibok, were a few kilometres into Korongilum when their gun-trucks and other vehicles in the convoy were blown off the road by the explosive.
“Seven soldiers were badly injured, and the leg of one of them was cut off by the explosion,” a source said.
“The troops were led by an operating officer on the directive of lieutenant colonel SA Yahaya, the commanding officer (CO) who was coordinating from the battalion headquarters.
“The CO may have been the target as one of his vehicle was part of the convoy, but he was not there.”
Another source said: “It appears Boko Haram insurgents have planted IEDs all round the community, and some of the villagers have started packing their belongings for the fear of another attack.”
One of the residents who also spoke with TheCable said: “As we speak, there are no troops here. Those who were meant to be here ran into the IED yesterday, and we are yet to see another reinforcement.”
When contacted, Sagir Musa, army spokesperson, said he was not aware of the attack on the soldiers.
“I cannot react because I’m not in Maiduguri. I am not aware,” he said.
Soldiers have been the target of Boko Haram attacks recently.
In January, a driver attached to Olusegun Adeniyi, commander of operation Lafiya Dole, was feared dead when the insurgents attacked the commander’s convoy.
Top Stories